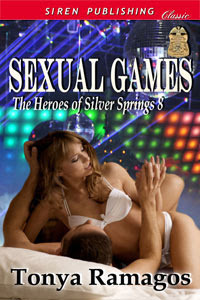 FBI agent Jackson Graham is tired of playing games. He wants Mallory Stone and he’s made his intentions clear. While Mallory is burning hot for a night of passion, she won’t give him her heart, and he won’t settle for less. He’s warned her when his tie comes off, it’s really going to be time to play. He has some new games in mind, and the prize will be more than her delicious, sultry body.

Why can’t no-strings-attached sex be enough for Jackson? Jackson knows Mallory wants him in her bed, but he won’t let it be that easy. He wants her heart. A life spent knowing the consequences of love has put her heart under a lock she simply cannot allow to be broken. But when a case puts her in danger, fears swap sides, emotions run wild, and they find themselves playing a game they both might lose.

This story’s title is drawn from a book given to the hero by his sister-in-law who lives in Silver Springs and is married to Jackson Graham’s twin brother.  The main characters in this story appeared first in Book Two of this series but their expanded story is the main story of this novel.  Yet there are also two or three other characters who first appeared in earlier books and who give the reader the sense that there will be more to come.

This story is built around the age-old conflict between a  man who wants a commitment, a marriage and kids, or in a word, the whole nine yards, and a woman who is fearful of commitment for a variety of reasons that lie deep in her past and who has lived happily with those fears as a person of one night stands or very short sexual involvements.  No matter how she tempts Jackson, no matter how overt her come-ons may be, he refuses to give in before he has some indication that Mallory is willing, even to a small degree, to consider a long-term relationship that goes beyond sex.  While their relationship, on or off as the case may be, is at the heart of this novel, there is also the secondary story line of a human trafficking ring that is being perpetrated behind the scenes of one of the local strip clubs and where Mallory is sent in as an FBI undercover agent.  The encounters between Jackson and Mallory are incendiary, the budding relationship between their bi-sexual co-worker and a visiting fire-fighter from the Silver Springs Fire Dept. are also included and are a part of a previous gay encounter that ran into difficulties, and with lots of action as the police and FBI work to uncover those behind the sex slave ring, the “owners,” and those who are killing women working at the strip club.

It’s a book that is written in such a way that the reader will definitely be engaged in the romance but kept on the fine edge of the seat with the suspense of finding the bad guys.  It is also an insightful treatment of what is going on inside a person who is truly fearful of commitment–a problem that both Mallory and her brother are forced to face as the story progresses.  It often takes a very dangerous and life-threatening situation to bring a person face to face with themselves.  So it is with the characters in this book and perhaps with us readers as well.  Tonya Ramagos was unknown to me until I discovered her Heroes of Silver Springs series months ago.  I have enjoyed and been entertained by every one of the books in this series.  It has been a while since she has publish a new book in the series so I was delighted to discover this new addition.  It’s a great romance and one I think all lovers of romance fiction will enjoy.  Lots of good people here.  It may even get you to think about reading other books in the series.  They’re great, too.

This book is available from Siren Publishing. You can buy it here in e-format. This book was provided by the publisher for an honest review.