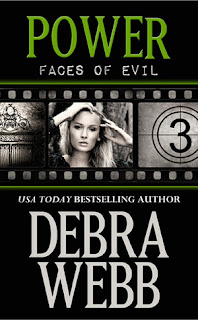 Judith’s review of Power (Faces of Evil, #3) by Debra Webb

Agent Jess Harris is back in another thrilling installment of Debra Webb’s Faces of Evil series.

Jess is ready to start the next chapter in her life as the new deputy chief of Birmingham’s major crimes division. But with her first love, Chief of Police Dan Burnett, acting as her new boss, it looks like Jess won’t be able to put the past behind her that easily.

Jess has decided to focus all of her attention on work when a celebrated ballet instructor is found dead by one of her students. Though Jess’s instincts tell her otherwise, the death is ruled an accident, and the case is assigned to another division. Still, Jess can’t shake the feeling that there’s more to the story, and her investigation leads her into the worlds of Birmingham’s gang culture and its powerful elite.  Now Jess’s investigation has dug a little too deep, and there’s a target painted on her own forehead. Will she be able to solve the crime before her own life is in jeopardy?

By the time a person reaches that 4th decade of life–the Big 4-0, there will undoubtedly be events and relationships from the past that manage, without anyone’s help, to come back and metaphorically “bite us in the butt.”  So it is with the heroine in this new novel by Debra Webb, an author who is rapidly becoming one of my favorites.  Deputy Jess Harris is a woman who has decided to set aside any dreams of loving and begetting in order to give all her energies to being the best law enforcement officer she knows how to be.  Her one foray into marriage ended in divorce because, as her ex accuses, she was never willing to give her “all” to the relationship.  Giving that “all” was reserved for her chosen profession.  And giving her “all” meant that she crossed departmental lines, the kind that make other co-workers mad, that upset the upper chain of command, and land one in deep doo-doo.  Jess knows how that feels because she has been there, done that.

Now she has literally come home to Birmingham, Alabama, the place where she lost her parents, lost a sense of belonging, and a town she couldn’t leave fast enough in her teen years.  Jobless, in bad with her FBI bosses, needing a new start, Jess has come home to take a position in a new department that was created for her, but which doesn’t come without strings–hidden and hard to decipher, but strings nevertheless.  She is an outsider with the department insiders yet she has connections that go way back.  A very curious context both for her life as well as for her profession.

This is a novel that is skillfully written so that the reader is grabbed and held on to from page one.  It is full of suspense, departmental politics, all of which is cast against the backdrop of her old and still simmering affair with Chief of Police Dan Burnett, a man who walked away from Jess 20 years ago and a man who now knows that was a terrible personal mistake.  Now he and Jess have to find a way to navigate the dangerous waters of managing a personal relationship while maintaining professional distance and the boss-employee configuration.  Add in a murder investigation that is taken out of her hands but whose “players” continue to involve her in the tentacles of the matter, a missing-persons case that has large media attention and which involves some pretty heavy handed gangbangers, and you have a novel that is complicated and which keeps the reader on edge to manage all the characters, the situations, the emotional ups and downs in order to figure out what is really going on.  It’s a novel full of people, places, and events, yet it all works and comes together in the end like a beautifully woven tapestry.  There are surprises and teasers throughout.  What’s a good novel without those?  And those who love a rich and engaging suspense novel will appreciate the work that has gone into making this a story that readers will want to see continued on.  It’s the mark of a good series.

It would be a good thing for readers to have read the first two novels in this series–Obsession and Impulse.  However, this story is a stand alone book and can very successfully read on its own.  Suffice it to say that this is a terrific read and one that begs to be enjoyed.

This book is available from Forever Yours. You can buy it here or here in e-format. This book was provided by the publisher for an honest review.