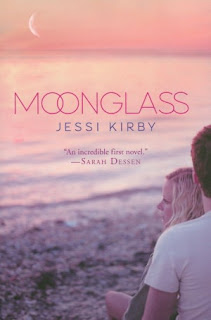 When Anna was little, she and her mother used to search for sea glass, but since they looked at night, they called it moonglass. Now, ten years after her mother’s mysterious death, her father is working as head lifeguard on the same beach where her mother grew up and her parents first met and fell in love.

Reluctant to get close to anyone (including her father) and not pleased about having to start at a new school, Anna begins to spend more time alone, running the length of the beach and wondering about who her mother really was. After meeting a lifeguard named Tyler, she slowly lets her guard down and together they start exploring the abandoned houses that dot the beach.

But when learning more about her mother’s past leads to a painful discovery, Anna must reconcile her desire for solitude with ultimately accepting the love of her family and friends.

Jessi Kirby has definitely won me over with this book. She’s on my auto-buy list now. I read and adored In Honor when I read it last month and she made a fan out of me with this book. I’m all about summer reads and this book was definitely that. Kirby does a great job of pulling the reader deep into the story of Anna and she did a fabulous of job fleshing Anna’s character out. Anna was a complex character going through some very intense things and it was a treat to get inside her head and be a part of her journey.

So this story follows Anna as she makes her way to the town that will be her new home. Her mother passed away a few years ago, so it’s just her and her Dad but lately, things haven’t been as peachy as they used to be. Her Dad moves them to a small beach town called Crystal Cove, which is the town where he met her Mom. He got a promotion that came with a move and he took it, uprooting Anna from the only place she’s ever lived. Anna’s not happy about the move, since it was right before the start of her senior year but she goes along because what other choice does she have?

Over the course of the book, you see Anna coming to grips with her mother’s death, with the move and with the divide between her and her Dad. While she’s growing, she learns things about her parents and their pasts. Things she never knew and things that help her understand them, in a way that only being there in Crystal Cove could have done. She joins the cross country team and makes some friends that help her really move on from her old life. What I enjoyed most about this book was that you could see the change in Anna with each page. I thought Kirby did a great job of letting the story unfold in a way that kept things fresh and kept the reader interested. I read every single word and I wanted to because the writing flowed nicely and the scenes pieced together until the entire story was told and when it ended, I had that happy sigh thing going on and that’s how I know that I’m well satisfied with a book.

I really enjoyed getting to know Anna and seeing her come into her own. I loved the relationship between her and her father as well as the relationship that blossomed between her and Tyler. Tyler was a great love interest and my only complaint about this book was I could have done with more Tyler (but that’s just me being greedy). I really enjoyed the bits and pieces we got of Jillian and Ashley and thought they were wonderful additions to Anna’s new life in Crystal Cove.

Overall, this book was great and I enjoyed the heck out of it. I definitely recommend this book to fans of the author and of other authors like Sarah Dessen, Susane Colasanti and Deb Caletti. It’s a good read.