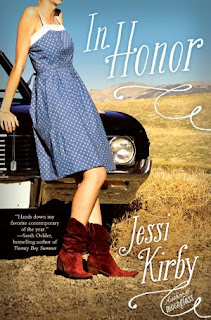 Rowena’s review of In Honor by Jessi Kirby.

A devastating loss leads to an unexpected road trip in this novel from the author of Moonglass, whose voice Sarah Dessen says “is fresh and wise, all at once.”

Hours after her brother’s military funeral, Honor opens the last letter Finn ever sent. In her grief, she interprets his note as a final request and spontaneously decides to go to California to fulfill it.

Honor gets as far as the driveway before running into Rusty, Finn’s best friend since third grade and his polar opposite. She hasn’t seen Rusty in ages, but it’s obvious he is as arrogant and stubborn as ever—not to mention drop-dead gorgeous. Despite Honor’s better judgment, the two set off together on a voyage from Texas to California. Along the way, they find small and sometimes surprising ways to ease their shared loss and honor Finn’s memory—but when shocking truths are revealed at the end of the road, will either of them be able to cope with the consequences?

I’ve been watching out for this book ever since I found out about it because I was mighty interested in reading it. I love reading books that have characters that have served in the military and in this book, Honor’s brother joined the military instead of going to college like he had planned and then gets himself killed while he’s stationed overseas.

His best friend Rusty, the guy that he was going to go away to college with (and got a scholarship with) had a disagreement and they stopped talking. Honor is surprised to see Rusty at the funeral and when he comes by the next morning, she’s surprised all over again. You see, Honor found a letter that Finn wrote to her with concert tickets to a concert in California and a mission for her to tell the singer (I forget the singers name) that he loved her so in her grief, she decides that she’s going to do it.

She’s going to fulfill Finn’s last wish for her and she’s going to drive to California and go to this concert and find a way to talk to the singer. When she tells Rusty her plans (he’s the only person she tells about her plans), he laughs in her face. He thinks it’s the dumbest idea he’d ever heard but instead of stopping her from going, he jumps in the car and goes along.

Honor doesn’t care if she’s being a crazy person, she needs to go on this trip and she needs to figure some things out about everything. Herself, her life, her grief. Crazy or not, she needs this trip more than she needs her next breath.

Man did I really enjoy this book. I loved getting to know Honor and I loved Rusty’s rough personality. I loved seeing them both come to terms with their loss and with each other. The romance isn’t huge in this book but you can see feelings popping up where they weren’t expecting them to. They needed each other and they needed this trip to get things off their chest and to help them each move on with their lives. While this isn’t my favorite road trip book, I liked the realness of it. The way that they fought, the way that they made up, it was all just too cute for words.

I thought this book was a great way to spend a few hours. It was entertaining, it hurt my heart and then my heart was made whole again. It wasn’t always easy to get through but Kirby does a fine job of making you want to push through the hard parts (where Honor wasn’t perfect) to find out what happens next. I’m so glad that I finished this book because I was so happy with the way that it ended. It ended the way that it was supposed to, it didn’t force this false relationship on both Rusty and Honor. I totally recommend this book.

This book is available from Simon and Schuster.
Buy the book: B&N|Amazon|Book Depository
Book cover and blurb credit: http://barnesandnoble.com

3 responses to “Review: In Honor by Jessi Kirby.”