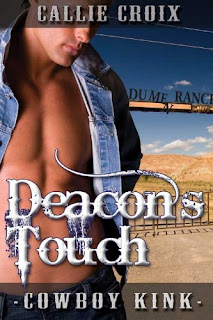 After her own engagement goes to hell, workaholic Jessica Talbot dreads her friend’s bachelorette party at a dude ranch in Nowheresville, Texas. But the outlook for the weekend brightens when Deacon Dumen picks her up at the airport. The sexy cowboy awakens every dormant sexual fantasy with nothing more than a friendly smile and a handshake.

Ex-Air Force Pararescueman Deke Dumen doesn’t know what to make of the sexy yet reserved brunette who breaks through the walls he built after an injury ended his career and a divorce soured him on relationships. As a guest at his family’s ranch Jessie is off limits, but the Dom in him rebels at the restriction, even as he realizes his penchant for control in the bedroom would likely scare the holy hell out of her. When Jessie shocks Deke by asking for exactly what he’s been craving, he’s ready to break the rules and introduce her to his own brand of dominance. Her willing surrender rocks them both to the core. But once the weekend’s over, they must decide if it was just a wild fling or the start of something more.

OK, so I really like cowboys–didn’t used to read much of the Western cowboy stuff, but in the last year or so I have discovered that they are what they always were reported to be: strong and silent type men. They seem to personify the belief that many have in the United States of what it means to be male, alpha, dominant. That doesn’t work for some folks, but it sure does make interesting and, to be honest, sexy reading. This particular author is new to me, but I enjoyed this book a lot and felt that both the story itself and the writing were well crafted.

This story is about two hurting people. One–the heroine–is recovering from deep betrayal by a man she has known and dated for quite some time and who has now abandoned her emotionally, broken their engagement with his bad behavior. She is less than enthusiastic about coming to this bachelorette party at a ranch in Texas–in the middle of the boonies–but she wants to be a loyal friend so she takes some time away from her life and her job in Washington State. Deacon Dumen has come home to be at his family ranch while recovering–on the one hand he has some physical recovery from his military service; on the other hand he, too, is scalded by the disrespect and infidelity of his wife and the divorce still is making him bitter toward committed relationships in general. Both Jessica and Deacon have positive reactions when they meet at the airport where Deacon has gone to “collect” Jessica. But his internal struggles with the changes in his life as well as with his own dominant nature make him back away. Jessica is not quite so reticent and takes the “bull by the horns.” Ultimately, things really heat up between these two. But what does this mean for them long term and does their short-term affair really solve any of the issues that impact their respective futures?

There is lots of fun in this book, some very colorful background characters, lots of hot loving, as well as some deep emotion that this author has brought to the surface and which will be felt by any reader. I know that I really wanted to see these two unhappy people find a way to resolve their hurts and heal each others wounds. I was impressed how this author managed to end the story–I wasn’t really prepared for it but enjoyed it tremendously. Readers will also encounter the power of a cohesive family, the rockem sockem interaction between the brothers, some gals who really like to party, a bride who truly loves her bridegroom but isn’t hesitant to kick up her heels one last time, and so much more. It is love, Texas style. It is a very engaging read and one that will fill some time in a quality way. I think lovers of cowboy romance will find it to be a very satisfying experience.

This book is available from Wild Rose Press. You can buy it here or here in e-format.