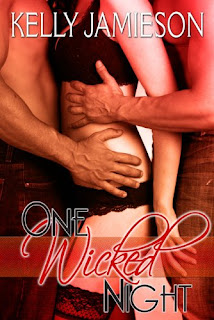 Tracy’s review of One Wicked Night by Kelly Jamieson

Ten years ago, Kaelin Daume spent a steamy summer home from college secretly hanging out with town bad boy Tyler Wirth and his best friend Nick Kernsted. The connection was warm, complicated, and came to a crashing end when she walked in on her two forbidden friends with another woman. The shocking scene of sex and bondage has haunted her boring, oh-so-vanilla life ever since.

The fallout from that night tore Tyler’s life apart. He left Mapleglen, disowned and disgraced, to build a successful advertising career and a unique relationship with Nick. Nothing could bring him back except his sister’s wedding, and he plans to hightail it back to Chicago as soon as it’s over. At least one good thing hasn’t changed: Kaelin is as sweet as ever. Except she doesn’t seem too thrilled to hear it.

As tensions run high, Kaelin can’t resist the temptation to commit one crazy act of rebellion. Once the web of secrets, sins and lies starts to unravel, though, their lives will never be the same…

Tyler Wirth and his friend Nick have returned to Mapleglen for Tyler’s sisters wedding. He hasn’t been back to his hometown in 10 years and he’s not sure he wants to be there now. He loves his sister but the town and his parents make things extremely stressful for him. Kaelin Daume, who Tyler has had a thing for for years doesn’t make it any easier. Sure, she’s nice and sweet but he knows that he’s no good for her so he tries to keep his distance.

Kaelin is trying to help her best friend with her wedding but she keeps thinking about Tyler and Nick. She takes the opportunity that she’s given the night before the wedding and decides to make the move with the two men. She initiates a threesome and the boys are more than happy to play along. The emotions run high and the sex is hotter than hot but shit hits the fan when they’re found out. Kaelin is considered a good girl and doesn’t want her reputation to head into the toilet but she also doesn’t want Tyler blamed for doing something that was consensual. Eventually Kaelin has to take matters into her own hands and break out of the good girl mode.

This book had a few things happening all within its pages. First we had the relationship between Nick and Tyler. It was something that had started in high school and had continued for the past 10 or 12 years between the two men. What started out as the desire to have more sex (in between girls) and to piss off Tyler’s parents, had grown into something else – at least on Nick’s side of it. Tyler was of the mind that he wasn’t good enough for anyone so he wouldn’t let himself actually see the relationship that they had together for what it truly was. Despite their close ties they both dated women as well and even had a few threesomes.

Tyler’s relationship with his parents was on the skids. Because of the event that had happened 10 years prior they had had basically no contact with their son. Tyler’s mom wanted everything to be wonderful for the wedding weekend. She had visions of the family coming together and everything being perfect.  She was actually quite proud of her sons accomplishments but because they couldn’t manage to have a civil conversation those word of pride were never spoken. With the parents it was always about how things looked and since Tyler was one to never be good when he could be bad they just didn’t mesh.

Then there was the tension in Tyler’s parents relationship. I have to admit that this part of the story seemed a bit odd to me. They had been married for years but the wife was unhappy. I understand that it showed even more tension between the parents and that translated to tension with Tyler but I just didn’t think it really added to much to the story and kind of took away from the relationship with Tyler, Nick and Kaelin.

I did end up thinking that Nick kind of got the short end of the stick by the end of the book even though he was more than included in the relationship between the 3 main characters. Kaelin just felt like she wanted him but didn’t love him – maybe that would be something that would grow. IDK, the dynamics of the relationship seemed uneven to me and it made me pause to wonder if it was a true HEA. Despite that though I liked the story and would definitely read more from this author.