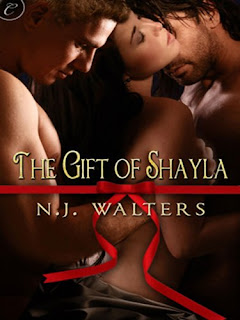 Judith’s review of The Gift of Shayla by N.J. Walters

Adam Lancaster has been in love with Rob McKeith—and attracted to Rob’s wife, Shayla—for years, but he fears their friendship would be over if they knew the truth. So he’s thrilled when his secret fantasy becomes reality and the couple offers him a very special gift: a sensual Christmas Eve in their bedroom…
Loneliness is, in my opinion, one of the most devastating emotions humans can experience.  Whether it is because of the loss of family or a significant other, whether it is because of economic disaster or physical disability, being alone–really alone–can eat away at the human spirit as effectively as the most insidious cancer.  Add in the factor of being bi-sexual, a reality that often keeps the individual living in relational shadows, and you have a really bleak outlook for a person like Adam Lancaster.  His friendship with Rob has sustained him for most of his life.  But now Rob has Shayla and their relationship, while not interfering with a strong and supportive friendship, leaves no room for hope that Rob could ever be more than just a friend in Adam’s life.
This is a novella that doesn’t take a lot of time and space to flesh out the characters.  It is typical of Walters’ characters:  lean and spare, just enough information to make the story believable, to give the reader a sense of the person, and then on to the action.  Rob and Shayla share a truly grand passion that has translated into a warm and loving marriage, a relationship that both find fulfilling and grace-filled.  But Shayla is also in possession of a giving and loving heart, a woman who keenly feels Adam’s loneliness and a person who truly understands the root cause of his sense of abandonment.  Both Rob and Shayla really do care deeply for Adam–both probably have loved him for a very long time.  It is their mutual decision to offer Adam a gift of their sexual togetherness.
The response to this novella seems to be that the reader either loves it or hates it.  There doesn’t seem to be much in between.   I am very up front about the fact that I am not a big fan of novellas.  I think any author who writes one could do just a bit more and end up with a whole lot more in character development, story development, and a novel that is substantive in length and content.  That being said, this is a work from the mind and heart of a writer who has told a truly warm and kindly tale that touches the heart and emotions.  Erotic, certainly, but behind all the sex and stuff is a genuine sense that Adam is being invited into more than he ever dreamed possible.   While there isn’t much mystery in this story, not many surprises, there is still that sense that opening their hearts to him in the most primal and basic way is the greatest gift that Adam has ever received and far greater than he had ever dared to expect.
So enjoy this little literary read–it is small in size and easy to read in one sitting.  But it is a heart-pleaser and one that true erotic romance fans will find enjoyable.  Don’t look for heavy stuff here.  It’s all just sexy fun.
I give it a 3.75 out of 5
You can read more from Judith at Dr J’s Book Place.