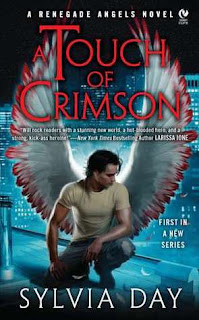 Ames’ review of Touch of Crimson by Sylvia Day.

Can a love that transcends death survive a war between angels, vampires, and lycans?

An angel with immense power and insatiable desire, Adrian Mitchell leads an elite Special Ops unit of the seraphim. His task is to punish the Fallen–angels who have become vampires–and command a restless pack of indentured lycans.

But Adrian has suffered his own punishment for becoming involved with mortals–losing the woman he loves again and again. Now, after nearly two hundred years, he has found her: Shadoe, her soul once more inhabiting a new body that doesn’t remember him. This time he won’t let her go.

With no memory of her past as Shadoe, Lindsay Gibson knows only that she can’t help being fiercely attracted to the smoldering, seductive male who crosses her path. Swept into a dangerous world of tumultuous passion and preternatural conflict, Lindsay is soon caught between her angel lover, her vampire father, and a full-blown lycan revolt. There’s more at stake than her love and her life–she could lose her very soul…

I really enjoy Sylvia Day’s historical novels. So much so, that even though I’m burnt out on paranormals, I still wanted to read this one.

There was so much going on in this book, I don’t know where to begin. First, the world-building. Adrien is the leader of the Sentinels and Sentinels are angels. They were originally tasked with watching over men. But as men and angels fraternized, a few angels gave into the temptation of men and women and fell in love, made babies. Children of humans and angels are Nephilim. Now the angels that gave into human emotion (lust, love, etc) were stripped of their wings and turned into the Fallen (vampires). Vampires can make minions. So now the job of Sentinels is to keep the vampire population in check. Vampires are cursed to live forever with their reduced status. Angels survive off the energy of humans and living beings. Vampires, since they’re angelic in origin, still need that energy from humans but can no longer access it so must get the life-force through human blood. Lycans came from those Fallen that chose not to survive off blood-sucking. They Sentinels use lycans to fight the vampires.

I thought the world-building was very interesting and well done. It made the whole vampire and lycan thing palatable because it was different.

Now the characters. Lindsay Gibson is heading to California to start over. She’s been hired on at a new hotel, she’ll be closer to her dad. When she’s not working or trying to act normal, she’s on a mission. When she was five, her mother was ruthlessly murdered before her eyes. Lindsay’s faith was shaken that day because she met pure evil. And she’s been killing evil ever since. It’s safe to say she has a spidey-sense when it comes to evil.

Adrian Mitchell is the leader of the Sentinels. He leads the angels and the lycans in their fight against vampires. He’s also got a personal vendetta against Syre, the leader of the vampires. A few lifetimes ago, Adrian fell in love with Syre’s nephillim daughter, Shadoe. Adrian was forced to kill Shadoe when her father was going to try and change her into a vampire. Since Shadoe was nephillim, her soul was strong enough to avoid death, and throughout the years, she’s been reincarnated in human women. Everytime she’s reincarnated, Adrian finds her…as does Syre, who wants to complete the Change in his daughter. And everytime she’s reincarnated, Shadoe dies.

It’s been two hundred years since Shadoe’s last reincarnation and Adrian has become more isolated, more cold. There’s no color in his world. And when a rabid vampire kills his pilot and he’s forced to take a commercial flight, Adrian runs into Shadoe’s reincarnation at the airport. And Lindsay is that reincarnation.

Once Adrian and Lindsay meet, the sparks are immediate. Adrian is drawn to Shadoe’s soul but Lindsay’s own soul calls out to him. Her personality is also a good complement to his. Lindsay is sassy and kick-ass and different from past reincarnations of Shadoe. I liked the way these two are together. Adrian is used to getting his own way and Lindsay keeps him on his toes. She’s also smart enough to fight the battles she knows she has a chance of winning. She’s not TSTL, not at all.

A Touch of Crimson is a solid beginning for a new series. There was a mystery going on in the battle between the vampires and angels. And since this is a series, it was left open-ended at the end. But I was ok with that because I felt the romance had enough resolution to keep me satisfied. And there was enough going on with the secondary characters to keep me wanting more. Adrian and Lindsay were hot, the world-building was well done. 4 out of 5 from me.

This book is available from Signet Eclipse. You can buy it here or here in e-format.