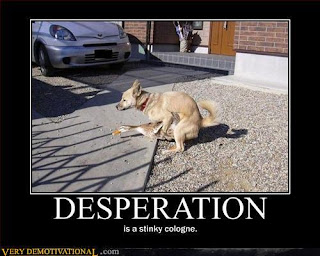 I recently read a contemporary romance novel where the heroine was 30 and desperate to get married. When I say desperate, I mean desperate enough to pay a matchmaker $1500 to set her up with her one true love. Only the matchmaker died, so her grandson had taken over the business. And naturally the grandson had an ulterior motive and no experience (and of course they fell in love in the end, because this was a romance novel), and was basically just bilking her out of the money. In other contemporary romance novels I’ve read, heroines have been so desperate that they’re willing to trap an man with pregnancy so he’ll marry her, or rape a man to get at baby.

My question is: Who are these women and do they really exist?

I’m skeptical, I admit. It’s not that I don’t think there are women out there who desperately want to get married or have a family. But with technology today, there are so many avenues to explore. I don’t understand why a woman would have to tie a man up and rape him to get pregnant. She could go to a local sperm bank and get the same results with a lot less hassle. If a woman wants to get married enough, tricking a man into having sex so she’ll get pregnant is silly. Especially with online dating sites and etc. If you’re going to marry a man, why not marry one who actually wants to marry you?

I think my biggest problem with these tropes is how it makes us, as women, look on the whole. A woman who is so naive she’ll shell out $1500 just for a chance at love? At 30 years old? Or one who will trap a man into marriage by getting pregnant on purpose, or worse, tying him up and raping him so she can get pregnant to have the baby she so desperately needs? These women make the rest of us look bad. Very bad.

Maybe I’m just being judgmental, but I’d like to see more strong, independent women in romance novels. Ones who don’t need a man to have a baby, or a baby to get a man. Where are the 30-somethings who have careers and are comfortable with themselves? Maybe they want a man in their life, but they aren’t so desperate they’ll resort to drastic measures to get one.

12 responses to “The Smell of Desperation.”