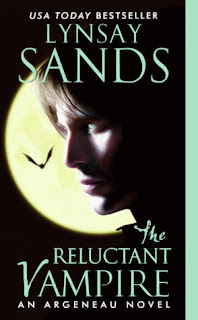 Tracy’s review of The Reluctant Vampire

Has this immortal finally met her match?

Rogue hunter Drina Argenis (from the Spanish side of the Argeneau family) has been many things in her years as an immortal, but bodyguard/babysitter to a teenage vampire is something new. There’s an incentive, however: the other vampsitter, Harper Stoyan, may be Drina’s life mate.

Trouble is, having just lost a life mate, Harper is resigned to being alone. He’s completely unprepared when sexy and unpredictable Drina bursts into his life to reignite his passions. Can Drina, with a little matchmaking help from their teen charge, tempt this reluctant vampire to take a chance?

Or will a dangerous, unseen renegade kill Drina and Harper’s one chance at happiness?

Marguerite Argeneau is at it again. She has this hinky way of meeting immortals and figuring that so and so might be a life mate for so and so. She’s definitely an immortal matchmaker! She manages once again with Drina and Harper. Marguerite has Lucian send Drina to babysit Stephanie (a girl who was kidnapped and turned into an Edentate by Leonius in a previous book and is now being watched in case he comes after her) because she suspects that Harper is her life mate. But Harper isn’t really ready to accept a new life mate as his first life mate died 18 months ago while being turned from mortal to immortal.

Drina and Stephanie, who hit it off immediately, decide that they should play Harper a little bit and he won’t know what hit him. They decide to just treat Harper like a friend but put some lusty thoughts into his head by heading off with him to buy sexy underwear, dresses and FM boots for Drina. The plan works and Harper takes Drina out on a date. Next thing you know Harper can’t keep his mind or hands off of Drina. But he definitely wonders how he could possibly have a SECOND life mate and his old friend guilt rears its ugly head. He feels horrible about what happened with his previous life mate, Jenny, but he can’t understand why he never felt with Jenny the desire he feels for Drina. (All is explained by the end of the book)

When all of the life mate events are happening there’s also someone trying to kill Stephanie – or so they think. Leonius had been spotted in America (they’re in Canada) but yet horrible things keep happening. Is it someone working for Leonius? They’re just not sure.

This was yet another good book in the Argeneau series. It did have a slower start for me than some of the others but I was soon zipping through and turning pages.

In this book Sands gave us more of a background on the immortals and what they’d been doing for their very, very, very long lives. It was really interesting to read about Drina’s adventures and what she’d done with her life. Harper, I must admit, wasn’t quite as interesting but I thought they made a lovely duo. Unfortunately since they were life mates the romance itself was a bit on the minimal side, but it worked in the end.

Stephanie was a great character. She was only 14 or 15 but seemed quite a bit older at some points in the book. She seemed to have these abilities as an edentate that turned immortals don’t normally have for quite a while after their turning. It was a conundrum for Drina, especially, and I was curious to see how that played out. Unfortunately that story didn’t come to an end in this book so hopefully we’ll read more about what happens with Stephanie in future books.

Overall it was a fun, sexy read and a nice addition to the Argeneau series.

2 responses to “Guest Review: The Reluctant Vampire by Lynsay Sands”