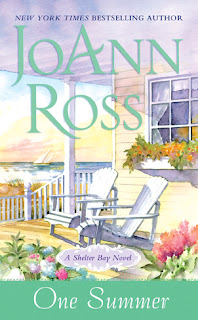 Lori’s review of One Summer

When former U.S. Marine photojournalist Gabriel St. James arrives in Shelter Bay to help out a fellow Marine, the last thing he expects is to meet a woman like Charity. A veterinarian with a past that would have defeated a less resilient woman, Charity still possesses a heart as generous as her name. She’s known men like Gabe before-but with a shared attraction impossible to deny, Charity and Gabe agree to a simple affair with no expectations. But as summer unfolds, and Gabe finds reasons to extend his stay in Shelter Bay, he and Charity realize that there’s nothing simple about falling in love, and nothing easy about the choices of the heart.

I’m such a ho for JoAnn Ross. She’s one who can go from the sweet, small town romance to the alpha military hero without blinking an eye. I know that a lot of people didn’t absolutely love her High Risk series, but I admit to lapping them up like a slobbering drunk.

I have to say, though, I do love the way Ross writes small town. Smart people, just a teeny tiny bit of the crazy in them, and lots of friendship and love to go around. The secondary characters were terrific, adding all the support to the hero and heroine. I adored that Charity and Gabe both were so supportive of the foster care camp, and that Charity felt so strongly for the kids and fell in love with a pair of siblings and chose to adopt them.

Gabe is a Marine photographer, and acts every inch of the hard Marine when he’s facing off in an uncomfortable situation. As he got to know Charity, he softened until he was a ball of goo. I loved watching him fall for her. He loosened and opened up like a flower in bloom. I loved watching Charity manipulate him into keeping the rescued dog and helping out at the camp, and pretty much anything else that she wanted. He was so easily maneuvered.

Charity was already much more open to a relationship, although she had her own baggage. I enjoyed watching her relationship with her mother grow and come to a place of understanding. I really liked how both these characters evolved, which was why when Gabe still denied that he was in it permanently I wanted to smack him upside the head.

Ross, however, doesn’t make us or Charity suffer too much, as Gabe only makes it 2 hours before he comes groveling back. Full of awesome.

A crusty hero with a squishy marshmallow center, and a competent, smart, sexy heroine. What more can you ask for?

You can read more from Lori at I Just Finished Reading…

This book is available from Signet. You can buy it here

One response to “Guest Review: One Summer by JoAnn Ross”