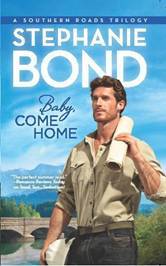 The hardheaded Armstrong brothers are determined to rebuild their tornado-ravaged hometown in the Georgia mountains. They’ve got the means, they’ve got the manpower…what they need are women! So they place an ad in a Northern newspaper and wait for the ladies to arrive.

Civil engineer Amy Bradshaw-Kendall’s ex-fiancée-fled Sweetness years ago, taking a precious souvenir with her. She’s back now…but only on a professional level. Really.

Little does she know that old flames always burn the hottest . . .

This review is full of spoilers and curse words. Read at your own risk.

I expected to love this book. I really liked the first one and was intrigued by the past history of this couple. It started out well enough, but a few chapters in I started getting a bad feeling about where things were headed..and I was right to be wary.

I can handle the secret baby plot device if it’s done well, ie she had a good reason for keeping the kid a secret, something outside their control keeps them apart, she tells him as soon as possible, etc. Unfortunately this wasn’t an example of how the secret baby plot works. It was a hot mess from beginning to end.

Kendall and Amy were high school sweethearts. She always wanted to get out and see the world, but Kendall’s roots were always firmly planted in their hometown. When her aunt died Amy expected Kendall to marry her and take her away with him (he was in the air force). When he refused she broke it off with him, telling him to never contact her again. They went there separate ways, but neither was able to forget the other.

12 years later, Kendall and his brothers are back in Sweetness, Georgia, trying to rebuild the town as green as possible after a tornado destroyed everything. Kendall knows where Amy lives (in what city/state) but that’s it. He respected her wishes and stayed away from her. But part of him hopes she’ll return home. He puts an ad in her local paper asking for woman to join their cause thinking maybe she’ll answer. She doesn’t, but Kendall’s older brother Marcus contacts her without Kendall knowing and offers her a job as the engineer of the new bridge in town. Amy agrees because she really needs the work.

Up to this point I was enjoying the story. I love reunited lover themes and I was anxious to see how things played out. But then things took a turn for the worse. Amy kept thinking about this “man” she had in her life..one who wasn’t going to be happy she was going to Georgia. This could have meant a lover, but I didn’t think so. And I was right. It was her 12 year old son. The 12yo son who also happened to be Kendall’s. Only Amy never told him..actually had no intention of ever telling him.

If her reasons for doing so had been decent, I probably could have overlooked it and moved on. But they weren’t. She figured since Kendall didn’t want her he wouldn’t want his son either. In the end, she admitted it was just “easier for her” if he didn’t know. Ever. The most ridiculous thing about this was that she admitted to herself and to others that he was a pretty amazing man. I think at one point she flat out called him a hero. She also muses that her son would really benefit from having a father and other close family. But still, she didn’t want to be around Kendall – because it was too hard, don’t ya know – so she decided it was better not to tell him about his son. And as for telling her son about his father? Well…maybe. Someday. When it didn’t hurt her so much.

Hurt her? Really? What about what’s good for her son? What about hurting him by keeping his father from him? A father she openly admits is an amazing, standup kind of guy? Of course that’s not as important as making sure she doesn’t get hurt again. Right?

If that wasn’t enough to make me hate her, her actions the rest of the book certainly sealed the deal. She didn’t even consider telling him about his son until more than halfway through the book. Then she decided it would be better to wait until she’d left town and had a chance to talk to her son about it (who was in military school, btw, which was court ordered because he was caught vandalizing his school). She even slept with Kendall, and allowed him to believe his son was really her boyfriend (he overheard her on the phone and jumped to the conclusion that she had a boyfriend she loved..she didn’t correct him and actually kind of encouraged him to think he was right). He noticed she was wearing a mother/child pendant that had belonged to her mother and commented on it. When she explained who it belonged to, he said something like “Oh, I thought you were keeping something from me, haha” and she says, “No, of course not” but inside she thinks “I need to tell him….later”. This is about 5 seconds before he puts his penis inside her. WTF??? WHO DOES THAT????

But that’s nothing compared to the way she acted after he found out what she’d done. She’d deliberately pick fights with Kendall in front of her son, making him out to be the bad guy. It get so bad, as a matter of fact, that the kid runs away so that she’ll never have to deal with Kendall again. She’s such a selfish, cowardly bitch that she makes her son think he has to GO AWAY so she doesn’t have to deal with his father. W.T.F.?!?! WHAT.THE.FUCK?!?!? OMFG.

At this point not only did I want to drop kick her off a very high bridge, but I started doubting the hero and what the hell he saw in her. She was a selfish, bitter bitch and he kept pining over her. I wanted to scream “TAKE THE KID AND GET OVER HER ALREADY”. Actually, I think I did scream it. She didn’t come across as a good mother, or hell, as a good person. Why was he so set on working things out with her?

She decides she’s leaving town and taking the kid with her. Hero says, “I will be seeing my son” and she says “We’ll see about that”. Why? Because she doesn’t want to see him. It had nothing to do with her son or what was best for him, it was all about what she wanted. It just hurt sooo bad, seeing her ex all the time like that. She didn’t want to put herself through the constant pain of seeing what she couldn’t have. Except she was the one who pushed him away, not the other way around.

When Kendall says fine, he’ll leave town – even though he’s committed to the project and desperately needed – and move where she does so he can see his son, she ascribes all kinds of negative motives to why he would. But when he confesses that he loves her she’s “confused” and not sure what to do. I have a suggestion..but I’m not sure it’s physically possible. I still feel like she should try it, though.

The final resolution approached with lightning speed. With half a page left of the book, hero and chick find son and she says “We’re going to stay here and live with your dad” and of course this is the first dad has heard of it. Plus, until like half a second before that kid was hating dad because mom had made him out to be some kind of crazy monster. But kid says “So we can be a family” and she says “yes, of course”. And that’s it. The end. 335.5 pages of her being a douche nozzle twat and then he says I love you so all is right with the world and she can finally do the right thing? No. Just no.

I did love the parts of the story that focused on the town and their rebuilding efforts. I also loved the scenes between Kendall and his son. The way they got to know each other and rely on each other was wonderful – when the psycho claiming to be his mom didn’t ruin it, that is.

This book is available from Mira. You can buy it here