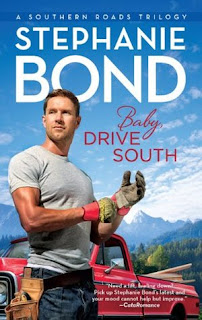 The hardheaded Armstrong brothers are determined to rebuild their tornado-ravaged hometown in the Georgia mountains. They’ve got the means, they’ve got the manpower…what they need are women! So they place an ad in a northern newspaper and wait for the ladies to answer their call….

Porter, the youngest Armstrong, is all for importing women. Still, he’s so blown away by the sheer numbers, he falls off the water tower. Luckily there’s a doctor among the newcomers—sweet and sexy Dr. Nikki Salinger.
And Porter has every intention of checking out her bedside manner….

This was a great start to a new series. I really liked the setting and the concept behind the town the brothers are trying to rebuild. The idea of building a green town from the devastation of a tornado is pretty awesome.

Porter, Kendall and Marcus Armstrong grew up in Sweetness, Georgia. They each left to make their way in the world, with every intention of returning someday. Then an F-5 tornado tore through town and detroyed it. Luckily no lives were lost, but the town was decimated. 10 years later the Armstrong brothers are back with  a plan to rebuild the town. They have a government grant and two years to prove they can rebuild using green methods. They have plenty of man-power, but what’s missing are the women. So they put an ad in the newspaper asking women to come help them start up the town.

None of them really expected it to work, but Parker, the youngest brother, spots a caravan of cars rolling into town and gets really excited. So excited he falls off the water tower and breaks his leg. Lucky for him, one of the new residents is Dr. Nikki Salinger.

Nikki is ready for a fresh start after a bad breakup and decides Sweetness is the perfect place to go. She has major reservations once she arrives, though. Not only is the town much more..rustic..than she thought, but Porter Armstrong does his best to insult her and make her feel unwelcome. He makes snide comments about her looks and compares her – very unfavorably – to some of the other women who showed up in town.


Porter promises his brothers he’ll get Nikki to stay – they really need a doctor, and she seems to be the person all the other women look to for leadership – and he sets about trying to win her over to the town.


I have to be honest, I really hurt for Nikki in the beginning. Her self-esteem has already taken a beating thanks to her cheating ex-fiance and Porter only makes it worse. His comments about her not being very attractive really hit hard. It was hard to like him at first because of it. On the other hand, he didn’t mean to sound the way he did. It wasn’t like her purposely meant to hurt her feelings. So as frustrating as he was, it was easy to move on as the story progressed. Because we know how Porter really felt about Nikki in the beginning, it was interesting to watch them fall in love. Especially since Porter has to battle not only his own attraction, but Nikki’s resistance because of his actions.


I really loved the rebuilding efforts of the town. The premise is an interesting one – make a totally green town – and Bond did a good job of describing the processes without info dumping. I also liked the relationship  between the brothers. They really care about each other and the town, even if they are typical men.


Nikki’s stubbornness and Porter’s dumb mistakes did get a bit tedious as the story wore on. I understood in the beginning why both acted the way they did, but it started getting old. Nikki especially. She’s a successful doctor, yet she had the confidence of a 16 year old. That didn’t make sense.


Overall this was a sweet story. I enjoyed the setting and the romance.

This book is available from Mira. You can buy it here

One response to “Review: Baby, Drive South by Stephanie Bond”