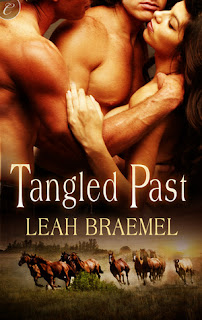 Judith’s review of Tangled Past

Forced to marry a man she just met, Sarah McLeod clings to the hope that she’ ll finally find the love and acceptance she’ s always craved. Her tenuous dreams of a happy life on the frontier are in danger of being dashed by the one thing she can’ t change—her husband’ s love for another man.  Jackson Kellar’ s determined to do right by his bride, yet he’ s torn between his newfound love for Sarah and his still-burning desire for Nate.

It’s 1887, and homosexuals are lynched without a trial.  It is the norm.  It is also only a few years since President U. S. Grant has declared:  “The only good Indian is a dead Indian.”  This story embraces the prejudices that grow out those realities and the characters in this story must deal realitically or lose their lives.

Sarah McLeod is grieving over the death of her mother, living in the home of her mother’s husband who looks down on her as a sub-human because her father was an Indian.  She is treated as a servant, and her stepfather makes no bones about the fact that she is property to him.  He easily sells off or destroys animals or items that were her mother’s and which are important to her.  Her feelings carry no weight with him.  He and his son and ranch foreman are also involved in a scam where they sell horses or cattle to other ranchers and then manage to steal them back.  Sarah becomes privy to this information and she makes her way out to the barn to warn Nate & Jackson who will be journeying home in the morning.  As she is really, really quiet in order not to alert her stepfather that she is warning these potential victims of his scam, she sees Nate and Jackson in each other’s arms.  Because the ranch foreman catches her in the barn with a naked man–Jackson, he demands that they marry and he take her away.  An easy solution on how to get rid of a woman who he really doesn’t want around anyway.  Because Nate still had his jeans on, Jackson is deemed guilty of compromising Sarah’s virtue.  Close call, and one that alerts Nate and Jackson that they are getting sloppy about acting on their love for each other.  Sarah, unbeknownst to these two men, saw their advances toward one another as being “beautiful.”  Her open heart and attitude will serve her well in the future.

This is a story that is exclusively about the relationship between these three people.  Jackson is a man of honor, and since he is bi-sexual, his wooing and bedding of Sarah is caring and gentle, and within the context of his determination to be a really good husband to her and to remain faithful to her in spite of his on-going love for Nate.  Nate, too, was a man of honor, for in spite of his growing attraction to Sarah, he did everything he could to support her marriage and to be just a friend to both her and Jackson.  It is only when he is injured, when his life is truly in danger, that Jackson lets down the walls and begs Nate to live, and Sarah is faced with their love far more overtly than had so far been the case.

There is deep hurt here and a sense of loss, that there is really so little chance that these two really fine men will ever be free to express their love for each other.  Add in the fact that both love Sarah deeply, and you have a story that will take the reader on an emotional roller coaster.  With a writer of Ms Braemel’s expertise, it will not be difficult to literally enter into this story and be deeply touched by their joys and disappointments.  One part of the side story that gave me a bit of a joy–her stepdad, her stepbrother, and the ranch foreman were eventually caught and paid for their crimes, thereby freeing Sarah from any contact with them in the future, and with the eventual death of Mr. McLeod, Sarah inherits the ranch where she experienced so much hurt and humiliation.  I don’t think she ever lived there again.

This is a really fine novel and one that will not be difficult to read even though it is not a simplistic love story.  It is so well-written.  I have read one or two of Braemel’s past efforts and I have come to enjoy her writing style very much.  And while the epilogue clues the reader in to the ultimate outcome of their life together, I was somewhat disappointed that the author brought the immediate resolution of their personal crisis to such an abrupt end.  In light of the social difficulties for bi-sexual persons, there was lots that could have entered into this story that was left unsaid.  Of course, that may be contrary to the author’s intent and may have resulted in a novel that took their story in an altogether different direction.  All in all, it was vastly entertaining.

This book is available from Carina Press. You can buy it here

3 responses to “Guest Review: Tangled Past by Leah Braemel”