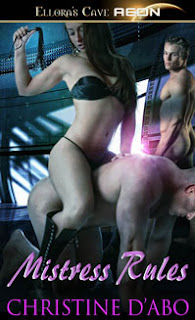 When Faris steps into his friend and mentor’s inner sanctum, he doesn’t expect to find Stella—a leather-clad Dominatrix. He can only watch as Ulric, the most powerful man in the sector, drops to his knees and throws himself at Stella’s mercy. Faris must decide whether to walk out the door, leaving his friend behind, or to put himself into the hands of a woman who demands nothing less than his absolute surrender. Ulric knows Faris holds himself responsible for the devastating attack on the colony outpost. If Faris doesn’t learn how to forgive himself, the young man will be on the road to emotional disaster.

His only hope is to convince Stella to bring Faris into their lives as another submissive. Ulric must now put his feelings for Stella on the line while holding tight to the man he desperately wants beneath him.

The story centers around Ulric, Stella and Faris. Faris holds himself responsible for an attack that was made on their colony and Ulric wants to help his friend get over it all by bringing him into the inner sanctums of his home. To the outside world, Ulric is this big, strong man who takes orders from no one. He’s sure of himself and he’s capable of keeping everyone safe but when he sheds that coat and enters Stella’s domain, his every move caters to Stella. He is her slave and she is his master.

Stella is sure in her role as Ulrics master, she knows what is expected of her and she knows how to take care of Ulric and she genuinely cares for him. There are roles that are played and Stella is strict in playing them and with the introduction of Faris into their little game, it throws the whole dynamic and Stella, off. The story centers around this. She has to go back and re-do the work she’s done on Ulric and then she needs to train Faris.