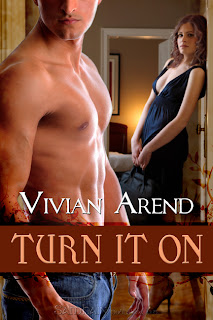 Holly‘s review of Turn it On (Turner Twins, Book 1) by Vivian Arend

Pushing the sensual limits can set off all kinds of alarms…

Inheriting her grandmother’s home is a dream come true for web designer Maxine Turner. She’s looking forward to a little freedom from the constant demands of her beloved, crazy mob of a family. When vandals expose just how vulnerable she is living alone, she seeks help.

Ryan Claymore’s well-thought-out life was wrenched out from under him when responsibility for his special-needs stepbrother landed on his shoulders. Going from military man to business man hasn’t been easy. He counts himself lucky he’s found Maxine to trade his security-system knowledge for her website expertise.

The red-hot chemistry that sizzles between them comes from out of the blue, and they both fight a losing battle to resist. Even the secret Ryan hides isn’t enough to keep Maxine from working her way into his heart—and his bed.

But something else might tear them apart. Whoever seems determined to destroy her home, and her sanity along with it.

This was a good contemporary romance. There wasn’t a lot of conflict – either internal or external – just two people getting to know each other and falling love. It was a sweet, sexy slide, too.

Ryan has left the army in order to care for his mentally challenged half-brother. It’s a major adjustment for him, but he’s making the best of it. He’s started his own security company and contacts Max Turner to help set up a website for it. As it turns out, Max needs a little help of her own..

Someone vandalized her house and she needs a security system. She offers a trade of services and Ryan agrees to check out her place. Even though the timing is rotten for both of them (Max is just breaking away from her family for the first time), they can’t deny the attraction between them. Though neither is looking for something long-term, they embark on an affair…that quickly becomes more.

As I said, I really enjoyed the progression of the romance. Ryan was sweet and attentive. Their early dates and the way he wanted to take care of Max was cute. Max’s independence was important to him and he didn’t try to take that away from her. The result was she felt cherished. Max wasn’t sure about getting involved with Ryan, especially after the way her ex treated her. But the fact that he was so sure of himself helped eased her fears. They really complimented each other, each giving and taking just the right amount.

The book wasn’t wholly without conflict – the vandalism at Max’s place doesn’t stop, which causes some tension between the couple. I started to get really annoyed with Max over this, but she was redeemed. Plus, Ryan isn’t completely up front about his brother in the beginning. His reasons for keeping his brother a secret were admirable, but I understood why Max was so upset about it.

I do have to say..the whole “Max” thing in the Turner clan was pretty cheesy (Pretty much every person in the family has “max” in their name, one way or another), though kind of fun (in a silly way) at the same time.

3 responses to “Review: Turn it On by Vivian Arend”