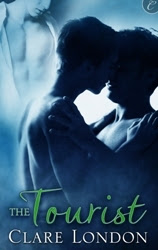 Visiting isn’t a science, at least not for me. It’s just what I do. Not that I mind, though. It’s not a bad thing, you understand, to find yourself in someone else’s body, stepping into a hot shower stark-naked and sporting a decent-sized morning wood.

Ace is a tourist. A spirit who spends his time visiting the lives of others for entertainment and sexual satisfaction. He can’t make anyone do anything they aren’t willing to do-but he is able to push them to their personal limits.

He’s currently visiting Dan and his lover, Ricky-a couple struggling with jealousy and words left unsaid. Emboldened by Ace, Dan becomes more sexually aggressive, a pleasant surprise for Ricky. But when an abusive ex threatens their newfound happiness, how far will Ace want to get involved? Will his fascination with the couple’s sexual games tempt him to protect them from a very real physical danger?

Ace is a spirit who jumps from body to body just to have fun and have sex. What more could a spirit want? But one day he jumps into Dan and he likes being there. Ace likes to delve deep into the body he’s in in order to bring out things in their personalities that they may be afraid to show at times. With Dan it’s a bit of the dominant in him and Ace likes that, but soon Dan seems to be a bit of a downer. You see Dan’s worried about his relationship with his boyfriend Ricky and Ace just wants happy, happy all the time. Ace decides that he’ll jump into Ricky and succeeds.

Ricky is a bit more free-spirited that Dan is but Ricky has his issues as well. You see, Ricky was in a relationship with a man, Calder, who tried to control every aspect of his life. You know one of those horrible people that not only tells you what you should wear or eat or think and when you don’t do what they say, they degrade you until you feel that the other person is the only one who truly knows what’s what? shudders Those type of people just freak me right out! Eventually Ricky got up the nerve to leave Calder but Calder is seriously delusional and can’t fathom that anyone would want to leave his great self. He calls Ricky constantly and unfortunately Ricky answers quite a bit. When Ricky finally tries to put his foot down Calder doesn’t take it well and takes matters into his own hands. But where does that leave Dan and Ricky.

In true Clare London style she sucked me in and didn’t let go until the last word of the book. I started the book and didn’t want to put it down until I was done.

The premise of the book was very different from anything I’d read before and it was great being able to see Dan and Ricky from the inside, but from someone else’s point of view, if that makes sense.

Ricky had gotten himself into a bad situation with Calder and it irked me that he didn’t trust in Dan or in their connection more and come clean about everything with Calder. I really felt bad for Dan at times but he was willing to wait until Ricky got his shit together and that made me like Dan even more.

I did get a bit confused at times because the story is told from Ace’s point of view and when the person that he was “in” was talking I just never knew if it was Ace talking, or if it was Dan, or Ricky. Were these really the person’s words that they were saying, from deep down where Ace was dragging them out? Or was it Ace who was saying them in that person’s stead? I think I would have liked to have more clarity with that in the end.

Overall, however, I really liked the book. Clare’s writing is always wonderful and I come away from one of her books with a smile on my face every time. What can be better than that?

8 responses to “Review: The Tourist by Clare London”