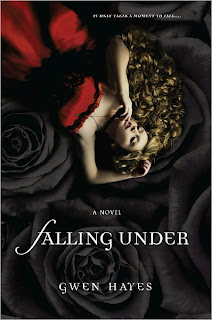 Today Gwen Hayes is here with us to celebrate the release of her debut YA novel, Falling Under.

Why Haden Black is no Edward Cullen

As an author who writes young adult paranormal novels, my book is going to get compared to Twilight. It’s just one of those things, and I can appreciate the marketing viewpoint. After all, Twilight has a lot of fans…like a gazillion. People who were swept away by the teen romance and drama about a girl falling in love with someone who isn’t one of our species are going to find that Falling Under has a similar premise. That’s a pretty big score for this author if they like it.

Stephenie Meyer is a good storyteller. Whether you are a fan or not, you have to admit she reached out and touched a LOT of people right where they live. You won’t hear me complaining about how her books brought readers in droves to the YA genre. And while I am perfectly fine with the comparisons, there is one person who is not, and his name is Haden Black.

Haden Black is no Edward Cullen. He really doesn’t want to be compared to him, it makes him angry, and we don’t like Haden when he’s angry. I like to call the following list damage control.

1. He’s not a vampire. According to Haden, vampires are disgusting.
2. Haden is not a vegetarian. And he really likes his food. If you get what I mean. (However, he
suggests that if you ever find yourself invited to a meal in Under, you skip the meat course.)
3. He doesn’t have a family like the Cullens to support him. His family ties are more than a little
dysfunctional. In fact, before he met Theia, he had no one that even saw the real Haden inside.
4. He doesn’t shy away from human companionship. You won’t see him ignoring the kids at school
and pretending to eat lunch in the cafeteria. Haden genuinely enjoys spending time with
people. Also, he’s a fan of Tater Tots.
5. He’s not shy about using the power of his charm on females. He employs it frequently and not
very judiciously. And he’s not apologetic about it, either. Girls are enchanting.
6. Haden is not immortal—but he’d be really hard to kill.
7. He’d like everyone to know that there are no circumstances in which it would be okay for his
main rival to hold Theia all night to keep her warm. For one thing, Haden doesn’t have rivals.
8. Haden thinks that “Hold on tight, spider monkey” is the lamest thing a guy has ever said to a girl.
9. Haden prefers guyliner and black nail polish to Edward’s lipstick stained “look”. Also, he likes to
wear cravats and top hats occasionally.
10. One word: Sparkles

Thanks for having me visit!

Since we’re talking about bad boys…who is your favorite bad boy character?

This book is available from NAL. You can buy it here

4 responses to “Guest Author: Gwen Hayes – Why Haden Black is no Edward Cullen”