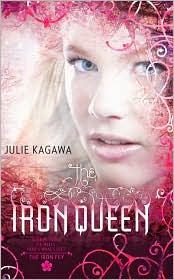 My name is Meghan Chase.

I thought it was over. That my time with the fey, the impossible choices I had to make, the sacrifices of those I loved, was behind me. But a storm is approaching, an army of Iron fey that will drag me back, kicking and screaming. Drag me away from the banished prince who’s sworn to stand by my side. Drag me into the core of conflict so powerful, I’m not sure anyone can survive it.

This time, there will be no turning back.

This is the third book in the Iron Fey series and it takes up not too long after the second book ends. Just when you think everything is over and done with, something happens to prove you wrong. Don’t you just hate when that happens? So there’s a new False Iron King in their midst and he’s going after the Nevernever. The Summer and Winter Courts are united in trying to destroy the new false Iron King and they’re losing.

She killed the last iron king, she can do it again, can’t she? Mab has no qualms about sending her in to try. She doesn’t care if Meghan lives or not so she’s got nothing to lose….because she’s already lost her son, Prince Ash to Meghan so Meghan isn’t high on Mab’s favorite list.

Lots of things pop off in this book. Meghan is just as charming as she’s always been (I’m trying not to roll my eyes down the street), there’s something about her that just gets on my nerves. The way she handled the whole Puck and Ash thing, the way that she’s so quick to jump down Puck’s throat for being immature when she should be the last person to talk about being mature since she’s far from it.

There were quite a few times when I wanted to choke Meghan the heck out and as much as she got on my nerves in this book, both Puck and Ash were there to pull me right back in. In all honesty, I can’t see what is so great about Meghan that both of these hottie faeries want her so much. I mean, the whole martyr act she puts on when the Seelie and Unseelie messengers come to deliver their royal court messages made me roll my eyes straight down the street. Her whole, “I won’t risk you both” line got on my nerves, I kept thinking, “Oh shut up and go practice your glamour!” Her reasoning behind it all was maddening and made me want to smack some sense into her.

There were points in this book where it was so easy to get lost in the descriptions of everything and because the descriptions were in depth, it was sometimes hard to follow and because it was hard to follow, the book dragged a bit for me. It was so easy for me to want to skip ahead to get to the good stuff and that’s how I know that I didn’t like this book as much as everyone else that reviewed this book already did but I will say that when the book finally did pick it, it sure did pick up.

Lots of things happen in this book that move the series along and I’m glad that I finished it because I ended up enjoying it more than I thought I would when I first started this book. Fans of this series should read this book to keep the party going and fans of Julie Kagawa won’t be disappointed, I don’t think. Don’t let my annoyance at Meghan turn you off from this book, you should still read it.

For all the Mom’s out there, I’d give this book a rating of:

There’s a whole lot of kissing going on in this book, mention of doing the wild thing and some violence.

3 responses to “Review: The Iron Queen by Julie Kagawa.”