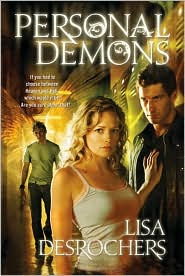 Frannie Cavanaugh has always been a bit of a loner. She’s spent years keeping everyone at a distance, even her closest friends. That is, until Luc Cain enrolls in her school. He’s hot, sarcastic, and dangerous –and Frannie can’t seem to stay away.

What she doesn’t know is that Luc is on a mission. Because Frannie isn’t exactly ordinary. She possesses a skill so unique that the King of Hell himself has taken notice, and he’s sent Luc to claim Frannie’s soul. It should be easy: All he has to do is get her to sin, and Luc is as tempting as they come.

Unfortunately for Luc, Heaven has other plans, and he’s just started making progress when the angel Gabriel shows up. Gabe will do anything to keep Luc from getting what he came for, and his angelic charm might just be enough to keep Frannie on the right path.

It isn’t long before Luc and Gabe find themselves fighting for more than just Frannie’s soul. But if Luc fails to win her over, there will be Hell to pay…for all of them.

On the front cover of this book, it reads:

“If you had to choose between Heaven and Hell, which would it be? …Are you sure about that?”

When I read that, my interest in this book went straight up. I mean, as a Christian, of course I’d choose Heaven but as I got further in this book, Hell was looking pretty dang good…that damn Luc and his sexiness just about did me in.

This book follows Frannie Cavanaugh as she is being pursued by both Heaven and Hell for her soul. She’s a special being and though she has no idea why Heaven and Hell want her, want her they do and they’re willing to do anything at all to attain her…well, Hell is. Hell wants her at any cost so the King of Darkness sends one of his top demons out to tag her soul. How Hell tags its souls is by making them sin and persuading them to fall into all sorts of sinful behavior and when Frannie sees Lucifer Cain, how can she not be tempted with his tall, dark and sexy self?

Luc thinks that he’s got this one in the bag because Frannie wants him bad and he’s surprised with how much he wants her as well. He’s confused because the more that he gets to know Frannie, the more he wants to know about her. In her company, he’s developing feelings and he kinda likes it. To throw a wrench in his plans and hard work, Heaven sends the angel Gabriel over to protect Frannie from Hell a.k.a. Luc and to say that there is no love lost between the two guys is putting it lightly.

This was an interesting book to read. Having to choose between Heaven and Hell literally and being surprised that though you really do like Heaven’s choice, it’s the guy from Hell that you will surprise you. I found myself falling a bit more in love with Luc as the book wore on and that surprised me because if anyone were to walk up to me and ask me to choose between Heaven and Hell, it’d be no question…Heaven for sure but with Luc, he made you want some. Real bad.

What I found interesting is that even though the front cover and the blurb of this book makes you think there really is a choice, when you read the book, there isn’t. Not at any time did I think that Gabriel had a shot with Frannie, not at any time did I feel like he was the right choice for Frannie. It was always Luc for me. A huge part of that was because we were able to see what Luc was feeling for Frannie, his feelings for Frannie were real, front and center whereas Gabe’s feelings were hidden away from us because we weren’t given his POV. If you ask me, Gabe was robbed because Luc was so much more real than Gabe ever had a chance to be and that was a huge reason why I loved Luc more than Gabe.

Even though I felt robbed, I still enjoyed the book. It was a wild ride that was enjoyable but there were times that I wanted to beat some damn sense into Frannie. She sure did act her age and more than once, I wanted to smack her a good one. But the book as a whole was enjoyable and I really want to read the next one. This was a great start to a promising series and I can’t wait for more.

Giveaway alert: I have an extra copy of this book and am going to host a giveaway of this book to a lucky commenter. All you have to do is leave a comment on this post, letting me know if you’d choose Heaven or Hell and why. Your name will be entered into a drawing and a random winner will be chosen and announced here on the blog.

For my Mommy’s out there, I’d give this book a rating of:

There’s some cussing and some sexy scenes (and thoughts) so this is your warning.

21 responses to “Review and Giveaway: Personal Demons by Lisa Desrochers.”