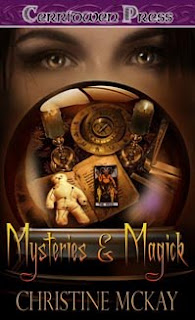 Judith‘s review of Mysteries and Magick by Christine McKay.

Poisoned Magic: White magic. Gray magic. Black magic. A witch is a witch. Right? Samantha never meant to cross the line. Hell, she didn’t even know a line existed. All she wanted to do was make sure John noticed her. Dabbling with the herbal magic her grandmother taught her doesn’t seem wrong. Especially when it produces such nice results. Of course, for those walking in the mystical ways, Samantha’s dabbling is anything but innocent. And for those who’ve long since crossed to the dark side, she is a downright delectable bit of flesh. But though black magic and its wielders may be able to blind a woman, they’ll never be able to fully control her actions.

Pierce My Heart: Shakespeare’s “Hamlet” had it more right than he knew. Hierarchies of angels, deities and demons walk among us, mostly unnoticed. But every now and again, Fate steps into a person’s life to bitch-slap some sense into them. Jessie is one of those “blessed” people. Sissy, a.k.a. Lechesis, an aspect of Fate, is on a mission, and she has angels Michael and Deacon at her disposal. Combining a Virtue and Power creates some potent mojo all on its own, but adding a lonely human woman to the mix is a sure way to shake loose the knots in the weave of life. Here’s hoping Jessie’s thread is strong enough to take it.

The world of the angelic and the demonic are the foundation and substance of fantasy fiction and hold lovers of that genre in its thrall. It has long been a religious belief that angels are asexual and demons are horny beasties. But fiction writers would have those lines blurred and the potential of a whole lot of hot loving does indeed invade fantasy stories. These two novellas that make up this anthology are most definitely in that category. The world of magic certainly resides right along side of the celestial and Ms McKay has crafted two stories that take all of these scenarios into her story contexts.

In Poisoned Magic, Samantha is a lonely lady, wanting to love and be loved. She really doesn’t deal with the realities of the magical world, sort of blindsided into believing that the gentle herbal magic of her grandmother was innocuous and harmless. What she didn’t plan on was that she may have failed to look deeply enough at the man after whom she lusted and whose affections she sought to bind to her. I found it interesting that her desire for John was so focused that she failed to take the concerns and warnings of her boss seriously. I didn’t find it surprising that John was not the “angel of light” that he appeared to be initially. That was sort of hinted at throughout the story. The eventual outcome of their relationship was a complete surprise and I was quite impressed at the author’s creativity in setting up the ending of the story as she did. This was the shorter of the two stories but it was beautifully written and when coming to the surprise ending, I felt that the story had not been hurried or given short shrift.

In Pierce My Heart, the longer of the two tales, the author took more time to set up the story background, give the reader a more complete understanding of the characters–up to a point–and to set the story in motion. That Jessie was unhappy, lonely, focused on her tasks as a research scientist, allowing her personal situation to fall into disarray, was evident right from the first. What was not so evident was the true nature of her neighbor Michael and Deacon, her new lab a assistant. What was evident was that they were both male to the core, built like gods, and absolutely gorgeous–sex on a stick. What was not evident was where they had come from and how they fit into her life. This story also brings Jessie’s friendship with fellow research scientist Scott into sharper focus. He was a colleague, a friend, someone who shared the garden bench at lunctime, a person with whom she worked when trying to overcome a scientific difficulty–all the above and yet was he more? Where did he fit in with her life, if at all?

Of course, like all fantasy literature, these stories make readers wonder if perhaps they are not more real than they seem. Do we not wonder about the presence of a magical world, the potential for good and evil that is contained therein? Do we not wonder if perhaps our important romantic relationships are formed and shaped by destiny, by the Fates, if you will? Certainly that is the gist of both these stories, and the characters are such that they bring those questions alive in a very believable way. Even Michael and Deacon, both of whom seem just a little “other worldly,” are still very human in their connection with Jessie. Jessie’s friends are very whimsical and yet, even with all these magical beings invading her life, Jessie is still emotionally “shut down” and reluctant to allow the messiness of a love relationship to upend her carefully orchestrated life. Life is messy, and so many readers use fantasy as a way of escaping into a world that is fun and free. But even there the messy realities of human existence seem to intrude.

These stories are very nice, good fantasy fiction. But they do indeed challenge the reader to think “outside the box” of what most individuals consider normal, asking each reader to consider whether they really might be an unseen world pressing in our earthly existence. If not, these are still fun and romantic stories to read, enjoyable in themselves and filled with interest, good people, not-so-good people, and situations that may or may not be some where we would like to find ourselves. Fantasies are, after all, just that–they are fantasies. And regardless of the sum and substance of one’s fantasies, it is curiously satisfying to read about others’ as well.

Thus, it is my sense that both romance fans and fantasy fans will enjoy this anthology and find it a very nice and entertaining way to spend some time.

This book is available from Cerridwen Press. You can buy it here in e-format.