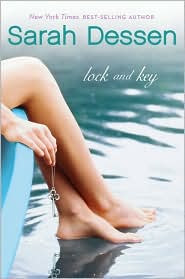 “Ruby, where is your mother?”

Ruby knows that the game is up. For the past few months, she’s been on her own in the yellow house, managing somehow, knowing that her mother will probably never return.

That’s how she comes to live with Cora, the sister she hasn’t seen in ten years, and Cora’s husband Jamie, whose down-to-earth demeanor makes it hard for Ruby to believe he founded the most popular networking Web site around. A luxurious house, fancy private school, a new wardrobe, the promise of college and a future—it’s a dream come true. So why is Ruby such a reluctant Cinderella, wary and defensive? And why is Nate, the genial boy next door with some secrets of his own, unable to accept the help that Ruby is just learning to give?

This is one of those books that kept my attention from the moment I opened the book until the end. I’m not sure why Sarah Dessen has the ability to keep me from sleeping but she does and I’m not even mad about it. She writes stories that I just can’t put down to save my life and this wasn’t any different. Was this my favorite book? Nope. But I still enjoyed the heck out of it. I loved it because it all felt so real. I could see something like this happening in real life and it kept me invested from beginning to end.

Ruby’s mother has left her all by her lonesome and she’s trying to hold down the fort until she either gets caught or her mother comes back. Getting caught comes first so Ruby is forced to go and live with her older sister, Cora. She’s not happy about it but she does it anyway. The minute she steps into her sister’s house, she can feel the distance that is between the two of them. Cora doesn’t know what to do or say to Ruby and Ruby doesn’t want to hear anything. They’ve got some familial issues to work through and Dessen did a great job of telling their story. She did a fantastic job of making me connect with both sisters. Ruby is mad at Cora for not coming back and Cora feels guilty because she feels that she should have done more for Ruby.

Watching Ruby try to come to grips with her new life was such a treat because it was all so real. The problems she went through are problems that everyone goes through at one point in their lives and because of that, you could totally relate to Ruby and to the other characters in this book.

What made this book click for me was Nate Cross. I adored him and my heart hurt for him. I wanted so much more for him and I loved the relationship that blossomed between him and Ruby. I thought they were so much more suited to each other than Nate’s old girlfriend. I don’t even know why, just that’s what I thought.

I loved the person that Ruby was becoming because of her relationship/friendship with Nate and vice versa. They were the two characters that I connected the most with and was rooting for throughout the entire book. I was rooting for Ruby to take that leap of faith where Cora was concerned and there were times aplenty when I wanted to smack some sense into her but not once did I not want what was best for her. Where Ruby was concerned, I felt protective over her, like an older sister. I wanted her to realize her worth and I wanted her to be happy.

This story definitely pulls at your heart at the same time that it pulls at the other emotions in your body, like frustration. Watching Ruby come into her own made keeping with this book so worth it. She went from being the young girl who kept to herself and rebuffed the attempts for friends from her family and the few people at her new school but watching everyone around her work their magic to thaw the ice around her heart made for such great reading.

I adored Cora’s husband Jamie. I thought he was such a great character and the way he was with both Ruby and Cora. You could feel the wealth of love he had for Cora and then eventually for Ruby. He treated Ruby like a little sister and I thought it was adorable.

My only gripe with this book was the ending. It was hinted at, not told. She gave you the tools and let you make up your own ending and for me, that wasn’t enough. I like the endings that are more concrete and in your face but even though I didn’t get that with this book, I still enjoyed it. I would definitely recommend this book to fans of Sarah Dessen who haven’t read it yet and also to fans of contemporary YA romance. It’s a definite treat.

7 responses to “Review: Lock and Key by Sarah Dessen.”