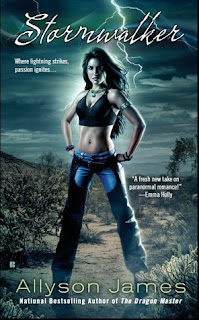 Janet Begay is a Stormwalker, capable of wielding the raw elemental power of nature’s tempests–a power that threatens to overwhelm her. Only her lover, Mick, a dark-haired, blue-eyed biker, is able to siphon off her excess energy and calm the storm raging within her–even as their passion reaches unimaginable heights of ecstasy.

Janet and Mick have come to the desert town of Magellan to investigate the mysterious disappearance of the police chief’s daughter. The barren land around it is full of vortexes, the gateways that connect the human world with the mystical realm of Beneath, and after encountering skinwalkers and receiving hints from a shape-shifting coyote and a smart-ass magic mirror, Janet fears that her own powerful, scary-as-hell mother is involved.

She’s also uncertain about Mick. He can wield fire and never get burned, and Janet can’t seem to touch him with her storm powers. But Janet must trust him, since she and Mick find themselves venturing where no human can survive alone–and only together can they overcome the greatest danger they’ve ever faced.

This is the first Allison James novel I have read and I have to admit that I was hooked from just about the first paragraph. I normally don’t care much for novels written in the first person–I like to get the point of view of all the characters–but it wasn’t too far down the first page that I forgot about that prejudice and just started getting involved in the story.

I was also delighted to read a book that embraced the Navajo traditions to the extent that was the case here. The Begay name is well-known in the Navajo Nation–I even have a hand-made piece of pottery that was crafted by a member of the Begay family–so that caught my attention on a personal level. I have long been fascinated by the Native American acceptance of the “other worldly” and am delighted that the main character in this story was a part of that tradition.

Ms James has been adept in expressing the frustrations that are often present in many love relationships–the trust issues and the sometimes lack of sharing of those deeper levels of who each person may be–just as it was between Janet and Mick. He would disappear for long periods of time. Even in the early days of their relationship, long before Janet decided to settle in Magellen–five-and-a-half years earlier, her love for him was constantly put to the test by his long absences and his refusal to explain why he was gone or where he had gone. He would just disappear and then re-appear at will. She was just expected to adjust. Little wonder that their affair lasted only six months. And little did Janet realize that in the intervening five years, Mick has been shadowing her, keeping her in sight, but keeping himself hidden from her.

This book is not a simplistic story. It is a very well-written novel, built on a solid and unusual plot, with a story line and characters that move forward at a steady pace and which are constantly submerging the reader in deeper mystery, questions that don’t seem to have answers, and personalities that are very strong but one wonders why they are there and what do they have to do with the story. Besides Mick the reader is introduced to a crow that seems to be ever-present, a coyote that visits regularly and turns out to be one of the ancient gods, a sheriff who is a former Special Ops guy with an obsession for keeping the rules and who probably hasn’t smiled for twenty years and who turns out to be a null–a person who can absorb magic without affect to himself , and a goddess mother who appears to be loving and wanting the love of her daughter–Janet–but whose true nature gradually emerges throughout the story. There are several story strands that Ms James weaves together throughout the novel, all of which make for an engaging story that continually goes in one direction or the other, and does a great job of keeping the reader’s interest.

This is a story about loyalty and trust, friendship and love, passion and authentic caring. It is a tale that embraces the best and the worst in human relationships, spiced up with the paranormal and the fantastic. It has a wonderful magic mirror (as in “mirror, mirror on the wall) that is sassy and is always interested in being a sexual voyeur. It also embraces, in probably the most extreme way, the need for each of us to make important decisions about the choices before us–good and evil, family loyalties, embracing the best in ourselves and being honest about the rest, and recognizing that no matter how frustrating a significant 0ther may be, do we want that person in our lives and what are we willing to endure to make that happen.

This is truly a delightful book and I urge romance readers and lovers of the fantasy and paranormal literature to give this book a go. I think you will find it a worthy expenditure of your time and effort. I give this book a 4.75 out of 5.