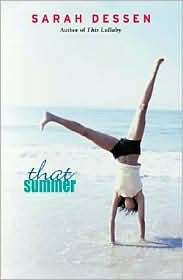 For fifteen-year-old Haven, life is changing too quickly. She’s nearly six feet tall, her father is getting remarried, and her sister, the always perfect Ashley, is planning a wedding of her own. Haven wishes things could just go back to the way they were. Then an old boyfriend of Ashley’s reenters the picture, and through him, Haven sees the past for what it really was, and comes to grips with the future.

This was one of the shorter books by Sarah Dessen. It’s not one of my favorite books but I still enjoyed it. I enjoyed getting to know Haven and I enjoyed watching her learn the life lessons that were in store for her.

Haven’s life is changing. Her Mom and Dad are divorced and her Dad is marrying the woman he fell in love with while he was still married to her Mom. I’m not sure if I could have gone to my Dad’s wedding knowing that my Mom was still hurting because of it. Of course, Haven goes and that’s because she was in the bridal line. She was a bridesmaid. Her and her sister Ashley were both in the wedding party so they had to go…but you could tell that Haven didn’t want to go and right from the jump, I felt bad for Haven.

I felt bad for her because as a teenager, I could remember hating change. I never wanted things to change because I was always happy with the way that things were. Like when we had to move to another city and I had to change schools. I cried forever. I wanted to stay at our house and I wanted to stay with my friends. I thought life wasn’t fair and I swore my parents were trying to ruin my life but then we’d move and I’d be unhappy for a few weeks and then I’d meet new friends and I’d forget all about my family trying to ruin my life.

With Haven, her entire world was knocked off its axle because her Dad was getting married to someone else that wasn’t her Mom. It might not be a big deal to us, outsides looking in but it was a great deal for Haven and it changed everything about her life.

We all know how changes can affect teenagers.

This book is another testament to how good Sarah Dessen is at writing realistic stories. You won’t find magic bean stalks and fairies running amok in one of her stories. What you’ll get, is an in your face story about characters that leap right off the pages living real lives and dealing with real life issues. I love that about all of her stories and Dessen did a fabulous job of making me come to care about Haven and want the best for her. As I read the story, Haven became like a little sister to me and I wanted to be a better sister to her than Ashley was.

The way that this story came together was fantastic. It was such a short story but you really got a lot out of it. Haven thinks back to the summer where Ashley’s boyfriend Sumner Lee goes to Virginia Beach with her family. It was the last time that they were all happy together as a family and Haven clamps onto the fact that Sumner was there with them and so when she meets up with him again, she clings onto him. Not in a love me, choose me kind of way but in a big brother kind of way where she wishes that Ashley would have stayed with him so that they could have hung on to the happiness that they had back in the day.

Yeah, it doesn’t work that way. Life doesn’t work that way and watching Haven come to realize that things aren’t always what they seem and that sometimes, you just have to move on was an enjoyable roller coaster. I enjoyed getting to know Haven and I enjoyed this story, it’s another good one from Dessen and fans of her stuff will enjoy this one as well.

…and that’s your scoop,

7 responses to “Review: That Summer by Sarah Dessen.”