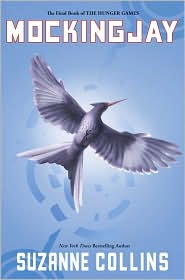 Against all odds, Katniss Everdeen has survived the Hunger Games twice. But now that she’s made it out of the bloody arena alive, she’s still not safe. The Capitol is angry. The Capitol wants revenge. Who do they think should pay for the unrest? Katniss. And what’s worse, President Snow has made it clear that no one else is safe either. Not Katniss’s family, not her friends, not the people of District 12. Powerful and haunting, this thrilling final installment of Suzanne Collins’s groundbreaking The Hunger Games trilogy promises to be one of the most talked about books of the year.

This is the final book in The Hunger Games series and I’m still not so sure I loved it as much as everyone else did. I liked it well enough but did I love it? Not really. I knew that the revolution was going to take over Katniss’ life and I knew in my heart of hearts who she was going to choose and even with all of that, I somehow felt let down.

I’m not saying that it was a bad book, I’m actually not even sure what I’m trying to say. All I know is that when I put the book down, I didn’t have that satisfied feeling in the pit of my stomach that I usually have when I enjoy a book so much that I want to shout my love for the book from the rooftops. That was missing.
I’m going to take a page out of Mollie’s book and hide my review as I’m just not going to be able to review this book without spoiling it for everyone that hasn’t read it yet so if you’re not scared of spoilers or if you’re feeling brave, go ahead and highlight my review and read it for yourself. If you don’t want spoilers then come back when you’ve read it and read my review. Maybe we can discuss, whatever you want. =)
***

I guess the crux of my problem with this book is that even though I wanted Katniss to end up with Peeta, the way that her relationship with Gale stopped left a bad taste in my mouth. The whole thing with Gale’s bomb being the bomb that killed Prim pissed me off (even if it wasn’t the bomb that he personally worked on, it was still his bomb). Why did that have to be the way that Katniss and Gale ended? It was like a cop out. She didn’t have to make a decision between Gale and Peeta because she holds Gale responsible for killing her sister. Easy peasy, the big decision was taken away from Katniss because how could she possibly be with Gale after Prim died? It kind of diminished her love for Peeta to me. It made what Haymitch said about her never being good enough for Peeta that much more true. Peeta deserved so much more than a bomb deciding his fate with Katniss. I know it was much deeper but no matter how you paint it, I wasn’t completely convinced that she chose Peeta.

There was so much crammed into this book that it was hard not to get caught up in it. I don’t feel like anything in the book was rushed as it felt like it was a long time coming. From Katniss agreeing to be the Mockingjay to Peeta’s torture and then finding out about how District 13 was run. Some other things that I didn’t understand about Gale was his belief that living in District 13 was going to be so much better than in District 12 under the rule of the Capitol. Right from the jump, I didn’t care for Coin and as the book wore on, it became more clear. She’s not good. She’s no better than President Snow. Yeah, there weren’t any Hunger Games but she ruled with an iron fist and if you didn’t fall in line with her vision then you were punished.
When we came across Katniss’ prep team from the Capitol and how Coin treated them, it made me realize that it was only a matter of time before Coin turned District 13 into her little playground and I was glad that Katniss picked up on that (if her cool facade whenever she was around was any indication) and even though Katniss wasn’t the one that killed President Snow, I was glad for the way that he did die. He died at the hands of everyone who’s life he ruined and I thought it was fitting. I’m also glad that Katniss was the one that ended Coin. That seemed fitting too since Coin’s plan was to off Katniss first chance she got. I cheered for Katniss because I was so happy!
Katniss was a totally different Katniss in this book but I understood why. She was stressed and rightly so because so many people were depending on her to lead this revolution and it was a lot to lay at the door of a 17 year old girl. There’s much to admire about Katniss Everdeen. When the rough got going, she stuck and she never strayed from doing what she thought was right. It was not hard to understand why Peeta was so in love with her.
If anyone was going to die, I wish it would have been Katniss’ Mom and not Finnick and Prim. I loved the both of them and was sad to see them go. Finnick had finally found the happiness he was seeking with Annie and I was glad for the both of them and Prim was so young, so young and a great sister to Katniss. I enjoyed the talks that both Prim and Katniss shared in this book. It showed just how much Prim had changed and grown since Katniss’ first trip to the Hunger Games. She was so wise beyond her years and I hated Snow for robbing her youth from her. It sucked when she died.
In the end, things ended the way that they were supposed to and Katniss ended up with who she was supposed to end up but it still seemed off because well, because of Gale. But as disappointed as I was in this book, I still enjoyed it and I’m glad that I read it.
Would I recommend it? Of course, you have to read how this series end. You’ll fall in love with these characters a little more and you’ll rejoice, cry and your heart will hurt but in the end, you’ll close the book and be glad that you know what happened.