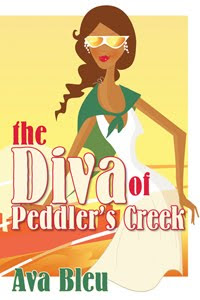 Judith‘s review of The Diva of Peddler’s Creek

by Ava Bleu
Romance novelist Taylor Beir will stop at nothing to get her mother off her back, including relocating to Peddler’s Creek to teach a little boy she doesn’t know how to read. But Christopher Doubleday doesn’t want to learn. His older brother, Boyd, has an invisible stick up his backside. And she suspects his parents, Mary and Jesse, of trying to transform her into the “good girl” she has never been, either by the power of suggestion or by filling her with endless goodies from Mary’s kitchen.

Taylor may be down-and-stuffed but not out. Someday the citizens of Peddler’s Creek, West Virginia, will realize that their hostility is misplaced, and recognize her for the gentle, misunderstood soul she really is. And they will admit that she is the best thing that has even happened to their dirt-water, backwoods, middle-of-the-creek town.

First of all, I have to say that the author of this really crazy novel has filled it with some of the most colorful characters I have encountered in recent months. The characterizations, the antics, the dialogue are all zippy and full of strength and color. It is absolutely impossible to read this novel without accurately picturing all the people and the way they interact. I think it is one of the most “in your face” reads that has been published recently.
Given that, there is a story here about a family who have a very troubled boy named Christopher who, quite simply, doesn’t want to learn to read. Taylor’s mother, having been born and raised in Peddler’s Creek, pushes and shoves and manipulates her to go and live with mom’s best friends, Mary & Jesse, so that she–a romance novelist, you know–can work her magic and teach this boy something. Taylor freely admits that she is out of her depth on this. Her mother seems to think that a summer in Peddler’s Creek will transform her into a socially acceptable, amenable, marriageable daughter. Mary & Jesse’s home seemed to be a literary version of “Mayberry RFD” and their seeming lack of concern about Christopher and their absolute faith in Taylor all seemed to be a bit out of whack. As I finished the book, I think that was intentional. Boyd, the oldest son and considerably older than his brother, was independent, a architect and building contractor, and someone who was deeply resentful of Taylor–styling her as a “diva”–even though he was sexually attracted to her.
It seemed to me that the whole situation was out of balance, and perhaps that is the point of the story. Taylor’s mother certainly seemed to be pushing her toward something she really didn’t want to do. Boyd really resented her. Mary & Jesse seemed bent on reforming her. The town was unwilling to accept her. Mary was working very hard to be the perfect homemaker; Taylor, on the other hand, was working very hard to be the perfect career woman. It was the supreme feminist clash. There seemed to be a change brewing–Mary & Jesse had to own up to being way too indulgent, that having the perfect home or the best recipes in town didn’t always substitute for discipline and guidance; Taylor had to admit that she wanted to succeed with this boy but her failure forced her to look at herself and to re-examine what she really wanted out of life; Boyd had to admit that he was determined to have Taylor in his life; the town slowly began to realize that Taylor wasn’t just a snobby nosed Yankee and actually had something to contribute to their community life.
This story is wild and crazy and just a lot of fun. I’m not sure that it will appeal to a lot of people but the writing is good, the plot is unusual, and the characters are fascinating. I do admit that I never really understood Taylor’s mother very well. I think she wanted her daughter to somehow succeed in that town where she failed. And perhaps by doing so the past with its disappointments could be put to rest. Maybe by sending Taylor there her mom hoped that the town could somehow realize that she hadn’t made a complete shambles of her life away from them.
Anyway, it is a fun read and I think we can all enjoy an amusing and witty story like this one.

You can read more from Judith at Dr. J’s Book Place
This book is available from The Wild Rose Press. You can buy it here

3 responses to “Guest Review: The Diva of Peddler Creek by Ava Bleu.”