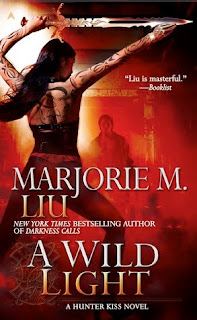 Obsidian shadows of the flesh . . . tattoos with hearts, minds, and dreams. By day, they are my armor. By night, they unwind from my body to take on forms of their own–demons of the flesh, turned into flesh.

For too long Maxine Kiss has felt an inexplicable darkness inside her–a force she channels into hunting the demons bent on destroying the human race. But when she finds herself convered in blood and crouched beside her grandfather’s dead body with no memory of what happened or of the man she loves, Maxine begins to fear that the darkness has finally consumed her.

With blood on her hands and her sanity in question, Maxine must face the truth about who she really is and embrace the love of the only man who can help her–before she loses what she cares about most: her family.

A Wild Light is a wild ride into a very dark fantasy world. Here the reader encounters figures from the beyond, demons/zombies who possess living humans, warriors from the hidden wastelands of another dimension who are seeking to wage war on the earth, ancient kings of the demon world, powers beyond understanding that are held at bay only by the love and concern of a woman who has inherited the task of fighting for the survival of the human race. From the creative mind of Ms Liu the reader is exposed to characters who represent the worst that evil can do and the best that love can wring from a human person.

Maxine loves her family. Throughout the Hunter Kiss series that is patently obvious, but in this newest book in the series the reader gains more insight into Maxine’s roots, her heritage, her ancestresses, and the sources of her powers. That she is virtually immortal is not in question–that is, as long as her “boys” remain with her. She has never questioned their presence. But she will learn why they are with her and why they were relinquished by her mother. We also travel with Maxine on her journey of discovery about her grandfather–that he is a truly ancient spirit that has been reborn numerous times, the latest of which is the person she knows as her mother’s father. She learns the true nature of her lover, Grant, of what he is made, some of his roots, the nature of his powers, and how his influence has affected her and those around her.

She makes some startling discoveries about her relationship with her boys–demons that live on her or around her, who guard her, advise her, cling to her, sing rock songs to her–especially songs that seem appropriate to what is happening at the moment–and why, if they are demons, they seem intent on doing good rather than evil.

Maxine’s loss of memory appears to be the result of information told her by Jack, her grandfather, that was so mind-bending in its scope and import that she would rather lose her memory than deal with what he has told her. Yet ultimately, she comes to recognize that she must deal frankly with the ramifications and move forward, acting on what she is discovering as well as being guided by her never-ending desire to do good for the world. She eventually comes to recognize and appreciate Grant even more than before, and together they must act on what she is learning about the intent of the demon world. The darkness inside her calls to her, and she must choose how she will respond. The lure and seduction of power beyond her wildest dreams tempts her with its promises to do more good than she can even imagine, yet her growing understanding of the way power consumes and goes its own way keeps Maxine from acting without thought.

This is not a book for the faint of heart. It is full of the raw reality of what evil can bring, of the need for support and family to ground all of us, of how even the most evil of beings can be changed by love and light. Maxine learns as must we all that one can never abdicate personal re sponsibility, no matter how powerful one may be. This is true in the fantasy world as well as real life. Caring and connection, loving and respecting one another still stands as a bulwark against the evils of self-interest and power-brokering.

I think it only right to comment that the plot of this novel is unusual in many respects, and the story line, while it moves forward, sometimes becomes obscure–only because the characters and their contexts are mysterious and difficult to understand. Yet in the end, all the strands, all the characters and their roles in the story come together into one final resolution that is grand in its scope. Just a great evidence of how a complicated and mysterious fantasy story can be told.

So to all romance and fantasy fans, to all who have read and enjoyed the Hunter Kiss series so far, this is another truly spectacular addition to that series and a mind-bender for all who are willing to enter Maxine’s dark world. Just as her grandfather endures and his love for Maxine endures through the ages, so we can all be sure that the power of love does not fade with age or death or the presence of evil. This is another worthy example of Ms Liu’s creative mind at work and fantasy fans owe it to themselves to read this novel. I give it a 4.75 out of 5 rating.

This book is available from Ace. You can buy it here or here in e-format.