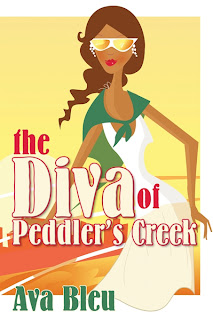 Check out this excerpt for The Diva of Peddler’s Creek by Ava Bleu!

He pretended not to notice…

…Taylor’s quick blink of surprise and then her sudden clutch onto the horse as she realized she was high in the air with no one to steady her.

“What the hell…?” she said, grabbing the saddle.

“Take the reins,” Boyd said from beside her, thrusting the leather into her hands without meeting her eyes. He couldn’t, or she would surely see the desire he was trying so hard to hide. The last damn thing he needed was Taylor getting wind that he found her attractive—any more than she already knew.

She took the reins quickly, annoyance making her movements jerky.

“Take it easy!” he barked, allowing his frustration to masquerade as anger and his desire to transfer into bluster. “I hope you realize you lost the wager.”

“You didn’t have the patience to allow me to do it myself.”

“You couldn’t do it yourself.”

“You didn’t,” he said with finality, turning away. He could feel the heat of her anger from where he stood, but only had a split second to enjoy it when…

“You are such a son of a…” She paired the last word with an angry kick. More of
a jerk, really. But it didn’t matter whether it was a kick or a jerk, because a millisecond later the horse beneath her kicked up its front feet, taking Taylor high into the air.

Boyd watched in horror as Flame reared slightly, causing Taylor’s eyes to go wide with surprise, and a screech to erupt from her throat before his prize steed took off and she disappeared like a blur before him…

This book is available from The Wild Rose Press. You can buy it here