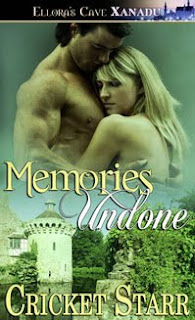 Judith‘s review of Memories Undone by Cricket Starr
Captain Albinan barely remembers his wedding night with Livilia, the infamous ice princess of Gal, so being summoned back to her side doesn’t thrill him. What’s worse is that all she seems to want from him is a child. Livilia isn’t too thrilled about having Albinan in her bed either, but he is her husband. An heir could be her only way to save her country from those who wish to seize control.
Fortunately, the pair has caught the interest of a goddess, Gillian D’Amatah. Dreams from the goddess provide the key to Abinan and Livilia rediscovering their passion, and give them the means to have a real marriage in every sense of the word.
This is a fantasy novella that appears, on the surface, to simply be the efforts by the goddess Gillian to renew and refresh a royal marriage, many of which are arranged and are seldom based on love or affection. Albinan was chosen out of all the princess’ suitors because she thought him kind and considerate and very good looking. All would have been well had it not been for the thoughtless and inconsiderate conversations Albinan overheard during the wedding reception — words that convinced him that the princess really cared very little for him and was only seeking a royal stud. He got completely smashed, and apart from being barely able to “perform,” he didn’t remember much and was called to war the day after the wedding. Now, six years later, a treaty has been signed, and these two spouses are facing each other for the first time. Both are resentful of the other, and reluctant to continue a relationship that started off very badly. But the need for an heir still remains and it would seem that it is even more important now than it was six years ago.
Enter the goddess of hearth and home, Gillian D’Amatah, who comes to Albinan and Livilia separately, convincing each that they have not given the other a chance to reveal their true feelings or to get to know one another. Following the goddess’ advice, some interesting situations develop, both on a personal level as well as involving the internal politics and struggle for the throne of Gal. Livilia finds out that her husband has a very good head on his shoulders and his instincts to protect her, her father, and the security of the country serve her well in holding the country together in what turns out to be a very difficult situation. Albinan discovers that Livilia is a warm, loving, passionate woman who truly loves her country and wants to do well. They serve one another as they give the other opportunities to demonstrate genuine caring and affection.
Now there are some bad guys: royal cousins that are working behind the scenes to take over the throne; Livilia’s sometime lover whose jeolousy ultimately betrays her; border clans who refuse to acknowledge the peace treaty. Lots going on in this novella and it all makes for some fairly interesting reading. It has been said that “Love conquers all.” I don’t know if that is particularly true, but it is certainly one of the main driving forces in moving this story to its conclusion.

You can read more from Judith at Dr. J’s Book Place.
This book is available from Ellora’s Cave. You can buy it here in e-format.