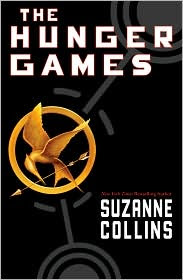 Sixteen-year-old Katniss is smart, athletic, and fast. She can take down a rabbit with a bow and arrow, hitting it straight through the eye. Will these skills be enough to survive the Hunger Games? Suzanne Collins, the author of the middle-grade fantasy series The Underland Chronicles begins anew, exploring a future landscape that will be familiar to devotees of science fiction’s dystopic strain. In a nation called Panem, which occupies the landmass that is the present United States, a parasitical fascist Capitol dominates 12 conquered districts. There was a thirteenth district but it was obliterated during a rebellion. The totalitarian government keeps the subjected populations in line by threatened devastation, starvation, and brutality.

This book was recommended from so many different bloggers that I couldn’t not read the book. When I first picked up this book, I thought it wasn’t going to be as good as everyone said it was but I’m glad to say that I was wrong.

I really enjoyed this book.

This book is entertaining at the same time that it’s disturbing. The whole story is set around The Hunger Games which is an annual event where two kids from the 12 districts in this futuristic country of Panem (I think that’s the name of the country) get randomly picked out of a lottery and then sent to the capitol where they’re thrown into an arena where they have to literally fight for their lives. The last person standing wins the Hunger Games and brings honor to their district.

The main characters in this book are from District 12, the coal district and their names are Katniss Everdeen and Peeta Mallark. Katniss is really the main character as we’re getting the story from her POV. This book takes us through the process that is the entire Hunger Games and then on to the actual Hunger Games themselves. We see Katniss before and during the Hunger Games. We see her with her best friend Gale before the lottery, hunting, trying to get some food for their families and then we see her with her younger sister, Primm and her mother. You can see the wealth of love she has for her younger sister and she shows just how much she loves her by entering into the Hunger Games.

Katniss has been through so much in her young life and because of that life, she’s harder than a lot of the other girls her age. She’s strong and she’s capable. She’s not rich so she knows what it’s like to be hungry and that gives her an edge when she goes to the Hunger Games. She can hunt and so she knows how to kill. You would think that this would be a piece of cake for her but it’s not. I enjoyed getting to know Katniss throughout the book.

Watching her maneuver her way around the Hunger Games and watching her get closer to Peeta was such a treat. I enjoyed getting to know them both and I cheered them on through out the entire book and wondered how they were going to both come out alive at the end. the way that everything comes together and the way this book ends leaves me wanting so much more from this series.

Right now, I’m so Team Peeta because I came to love him over the course of this book and I could tell from the jump that he had feelings for Katniss, I knew that everything he said and did for her over the course of the games was 100% real. Too bad Katniss didn’t see it but still, it’s going to be mighty interesting to see where things go between these two in the next book.

I so frickin love Peeta but I can tell that I’m going to love Gale more than I ever loved Jacob from Twilight. I have a feeling that this Team game is going to be a lot harder as I read more of the books.

If you’re in the mood for an action packed story with fantastic characters and so much more, than this is the book for you. This book is the start to something pretty great and I’m so glad that I read it. Thanks to all of the bloggers who have blogged about this book because it piqued my curiosity and is the main reason why I picked this book up.

This book is great, if you haven’t read it…READ IT! You won’t be disappointed!

10 responses to “Review: The Hunger Games by Suzanne Collins.”