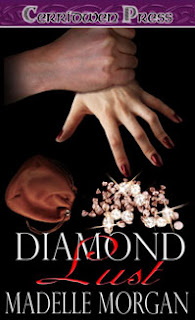 Diamonds and death — a combination Petra Paris never expected in her quest to exonerate her father of fraud charges. Petra is a headstrong geologist assigned to a Canadian diamond mine that is accessible only by plane. But the beautiful diamond hunter becomes the hunted. Unwittingly she has landed in a next of smugglers who are becoming increasingly desperate to escape with millions in uncut stolen diamonds. She’s in their way.

Seth, a cop with the Royal Canadian Mounted Police Diamond Protection Unit, undercover as a pilot, has wangled his way into the mine complex by posing as Petra’s boyfriend. She agrees to share a bedroom as long as he, in turn, protects her while she collects proof of her father’s innocence. That means working around the clock to meet the deadline. To her frustration, there is almost no time for another type of exploration, that of the cop’s rock-hard body.

But murder changes everything. The remote mine complex becomes a death trap, and lust on many levels threatens to consume them all.

The Good Book says that ” . . . the love of money is the root of all evil.” It would seem that such a truism is borne out in this tale of avarice, greed, betrayal, and murder. Add in a significant amount of romance and you have a very, very good read.

It is a known fact, also, that all of us like the novellas and short stories that entertain and keep romance fans company over lunch or while waiting in the dentist’s waiting room. However, every once in awhile, I want to sink my teeth into a substantive novel that keeps me glued to the pages and never lets me know what’s happening until the very end. This is just such a novel. It is so very well written that even those of us who have long ago cut our eye teeth on mysteries and suspense fiction could not figure out who the really bad guys were until almost the last page.

But in the midst of all the murder and mayhem there emerges a genuine love story between two people who have been hurt, feel betrayed by those they love the most, and who have made some significant decisions to avoid close emotional involvement in the future. However, Petra and Seth are, by necessity, thrown together into this boiling pot of intrigue. Seth has his goals that center on finding the smugglers. Petra, on the other hand, simply wants to gather sufficient evidence to clear any suspicion away from her father, even though she is still royally P. O.’d at him for breaking up their family when she was 13. Even though their reasons for being on the mine complex are different, both are in great danger and almost lose their lives as a result.

Never underestimate the power of the ole sexual attraction to kick open some emotional doors. And so it is with these two. I really liked the fact that Seth and Petra’s story was all wrapped up in the difficulties of finding the bad guys, and it was, of course, the kind of suspenseful tale that on its own would have been a good read. But to have this added sexual tension and exploration by these two individuals just expanded the story so much more.

I think this is a very good novel, and even though I have not previously read any of this author’s work, I would not be adverse to cracking open some other novels and/or short stories. I think this writer has proven to have the talent and expertise to carry off a complicated plot, a whole bevy of characters, both primary and secondary, and to keep the reader’s interest to the very end. This can and should be a very satisfying reading experience for both mystery and romance fans.