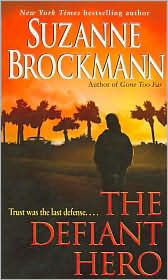 Rowena’s review of The Defiant Hero by Suzanne Brockmann.

“The United States refuses to negotiate with terrorists.” Meg Moore remembered the warning from her job as a translator in a European embassy. Those same words will spell out a death sentence for her daughter and grandmother who have been kidnapped by a lethal group called the Extremists. Meg will do anything to meet their unspeakable demands; anything — even kill — to save her child.

When Navy SEAL John Nilsson is summoned to Washington, D.C. by the FBI to help negotiate a hostage situation, the last person he expects to see holding a foreign ambassador at gunpoint is Meg. He hasn’t seen her in years, but he’s never forgotten how it feels to hold her in his arms. John could lose his career if he helps her escape. She will lose her life if he doesn’t…

It’s been a very long time since I last re-read this book. It brought back a lot of memories and reminded me how much some of the characters got on my hot damn nerves. In this book, it was mainly Meg, the heroine that I wanted to push over a cliff.

For those of you guys who haven’t read this series (or this book for that matter), the story begins like this. Meg and Nilsson met a few years ago while working. They got to talking, they became friends and because Meg was married at the time, Nils kept his distance and settled for just being Meg’s friend. Fast forward to now, Meg’s daughter and grandmother have been kidnapped and in order to get them back, she’s got to kidnap Razeem for the bad guys. Meg is deathly afraid for her daughter which is understandable but being afraid for Meg turns her into one big ol’ stupid pile of poo.

She won’t talk to anyone other than Navy SEAL, John Nilsson and Johnny rushes to her side to help her and what does she do? She lies to him, she makes him look like an ass in front of everyone he works with and his friends. But it’s okay because she’s sorry and she’s so sorry that she keeps right on lying to him over and over again.

John and Meg’s romance was never my favorite part of this book and it didn’t change with this read. In this read, Sam and Alyssa’s romance takes off. Their rocky relationship really starts to heat up here (with chocolate syrup to boot!) and boy did I eat up every last bit. To be honest, the reason I started with this book was because I wanted to remember Sam and Alyssa again. I wanted to understand my addiction to them. Meh, not really, I just wanted to see them again.

Watching Sam and Alyssa duking it out was like coming home after a long, busy business trip. Sam and his smart mouth, Alyssa and her take no bull shit attitude. It was great. But more than those two, what I really enjoyed about this re-read was seeing the boys of Team 16 (the team that I know and love) back together again. It’s been so long since I’ve seen these guys in action together and seeing the easy way they were with each other made me miss them all the more.

I loved seeing Sam and Wildcard tease Nils about his thing with Meg. I adored seeing them joke around with each other because those guys are so different from the guys on the new SEAL team now. With Sam, Wildcard and Nils on the team, they played around a lot but they also took their work seriously. If there was a goatfuck happening on any of their missions, it wasn’t because they were careless. It wasn’t because they were trying to have phone sex while they should have been looking around for terrorists. No terrorist would have been safe hiding in a closet when these guys were looking for them.

I guess you can see that I really miss these guys. While the main romance storyline between Johnny and Meg didn’t grab me this time around, I really did enjoy this re-read. I enjoyed reading Eve’s story with Ralph again, I enjoyed seeing Sam and Alyssa coming together and I really enjoyed seeing the other SEALs again. If you haven’t read this book then I recommend that you do because despite the TSTL heroine, there’s so much more to the book than just her.
You meet a bunch of guys that will melt your heartstrings up and make you sit up and pay attention. The action in this book is intense and just flat out entertaining. Suz Brockmann has a way of making you want to be in on the action in these books and I would definitely recommend this book to anyone who is interested in reading this series, it’s the bomb!

This book is available from Ballantine. You can buy it here.

5 responses to “Author Spotlight: The Defiant Hero by Suzanne Brockmann.”