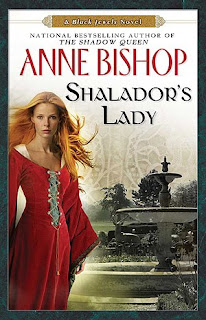 Tracy’s review of Shalador’s Lady (Black Jewels book 8) by Anne Bishop
For years the Shalador people suffered the cruelties of the corrupt Queens who ruled them, forbidding their traditions, punishing those who dared show defiance, and forcing many more into hiding. And even though the refugees found sanctuary in Dena Nehele, they have never been able to call it home. Now that Dena Nehele has been cleansed of tainted Blood, the Rose-Jeweled Queen, Lady Cassidy, makes it her duty to restore the land and prove her ability to rule.

She knows that undertaking this task will require all her heart and courage as she summons the untested power within her, a power capable of consuming her if she cannot control it. And even if Lady Cassidy survives her trial by fire, other dangers await. For the Black Widows see visions within their tangled webs that something is coming that will change the land—and Lady Cassidy—forever…

Shalador’s Lady picks up right where The Shadow Queen left off. Cassidy is under contract for one year with Dena Nehele but Theran Grayhaven is continuing to make her life impossible. Events come to a head when Kermilla, the Queen who had taken Cassidy’s previous court away from her, shows up in Dena Nehele to demand her Queen’s Gift. Theran takes one look at Kermilla and sees the queen that he had wanted from the beginning. A woman who had more power than Cassidy but also one that could wow with their looks. (He’s an ass.) When Cassidy asks Kermilla to leave and Theran insists that she stay as his guest Cassidy can’t take it any longer and decides to leave. Ranon intercepts her and gets her to agree to not run, exactly, but to leave and go to Shalador – still within Dena Nehele.

In Shalador life becomes good. Cassidy is able to be the Queen she is meant to be. She begins to do good for the people of Dena Nehele and Warlord’s, Warlord Princes and Queens begin to see that she’s nothing like the twisted Queens who ruled previously.

But Theran is determined to get Cassidy out of Dena Nehele after her 1 year is done and starts making his campaign known that he wants Kermilla in Cassidy’s place. Things heat up and Cassidy and her court take matters into their own hands.

I can’t tell you how much I loved this book. I thought it was a wonderful wrap up of The Shadow Queen and shows us how Cassidy comes into her own with those she loves. She sees that it’s the person inside of herself that is what matters and that what is on the outside isn’t what it’s all about. Her court, and eventually most of the people of her land come to know her and love her and it truly warmed my heart to see it.

I loved seeing Lucivar, Daemon, Jaenelle and Saetan in the book as well – and quite often. I always hunger for their appearances and I wasn’t disappointed. We also got to see plenty of Kindred in this book as well and that made me just as happy.

If you haven’t read the Black Jewels series I would highly recommend it. It begins with the trilogy which is dark fantasy but oh so good and continues with nothing but wonderful books after that. Shalador’s Lady is book 8 in the series. I’m not sure what’s next for the Black Jewel series but I’ll be gobbling it down as soon as it comes out.

This book is available from ROC. You can buy it here or here in e-format.