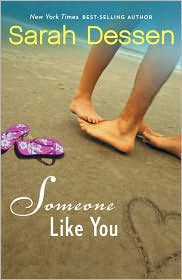 Rowena’s review of Someone Like You by Sarah Dessen.

Halley has always followed in the wake of her best friend, Scarlett. But when Scarlett learns that her boyfriend has been killed in a motorcycle accident, and that she’s carrying his baby, she’s devastated. For the first time ever, Scarlett really needs Halley. Though their friendship may be tested by the strain, like a true friendship, it will endure.

This is my second helpings of Sarah Dessen and it was another winner for me. It started off with a bang and I was immediately drawn to the characters from that first chapter.

You see, it’s summertime and Halley gets a phone call from her “Mom” who really is her best friend, Scarlett with news that her boyfriend (Scarlett’s not Halley’s) is dead. He was in a motorcycle accident and he didn’t make it. Scarlett is the confident friend in their friendship. She’s always the one that knows what to do and for her to sound so lost and to need Halley for once is big so Halley begs her Mom to pick her up from camp so that she could be with Scarlett.

There’s a quote in this book that relays everything you need to know about what this book is about…friends. Life is so much uglier when you don’t have a best friend to share your ups and downs with.

Halley is struggling with being there for her best friend, starting a new relationship with a bad boy and then finding some middle ground with her mother. She’s juggling lies, deceit and lamaze class as well. Scarlett finds out that she’s pregnant with her dead boyfriend’s baby and in an effort to keep his memory alive, she goes against her mother’s wishes and keeps the baby. You can only imagine the kind of talk that caused and through it all, Halley was right there with her. Having a friend as fiercely loyal as Halley was is truly a blessing and I’m glad that Scarlett had Halley in her life.

Halley was in the midst of finding out who she was and what she stood for. It took a lot of falling on her face to figure out that what she was doing, who she was doing it with and everything else she thought was good wasn’t as it seemed and seeing Halley learn these life lessons was a treat. It isn’t my favorite book of Sarah Dessen’s but I did enjoy it. I enjoyed getting to know Halley and I enjoyed getting to know Scarlett. I thought the bond between the two of them was great.

Halley’s relationship with her mother was so real. It could have been my relationship with my Mom growing up and the issues that arose between the two of them was something I could easily see happening between any mother and teenage daughter so I thought Dessen wrote that part of the story fantastically well.

I wanted to like Macon and in the end, I ended up liking him. He wasn’t the perfect guy but I wanted to forgive him for everything and I eventually did. I was pretty bummed with the way that the book ended but still, it was a great read.

This book is available from Penguin. You can buy it here.

3 responses to “Review: Someone Like You by Sarah Dessen.”