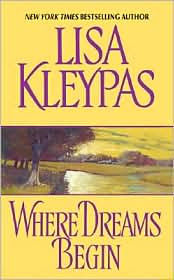 Lisa Kleypas is a genius at writing the kinds of heroes that women would swoon for. She writes the kind of heroes that we all love to love. The rough neck guys who come from the dirt and fight their way to the top.

Zachary was well aware that many aristocrats secretly mocked him for his low birth and his rapidly built fortune, claiming that his mind was bourgeois and mercantile, that he had no understanding of style, elegance and good breeding. They were correct in this assessment. He knew his limitations. However, he took a grim satisfaction in the fact that no one could afford to mock him openly. He had made himself into a force to be reckoned with. He had sunk his financial tentacles into banks, businesses, real estate, investment trusts…it was likely that he had some kind of monetary affiliation, whether large or small, with every man of means in England.

Goodness, this guy was filthy rich and how many of us don’t fantasize about being married to someone who was as rich as Zachary was? I do on a constant basis, mostly when my bills are due. But as rich and as handsome as Zack was, it wasn’t his money that I fell head over heels in love with in this book. What I fell in love with were the relationships that he had with his mother, his sister and then with Holly’s daughter, Rose.

Holy goodness, watching him get closer and closer to Holly’s daughter made me turn into a mushy pile of lust at his feet. Zachary was the kind of man that went to great lengths, no matter what lengths that might be to get what he wanted. He knew his own mind and he was comfortable in his skin. He knew that his mother and his sister didn’t fit in with the old life that they had, he knew that they needed to blend in with the new life that they had and he knew that he needed help with it so he went out and he got that help. He was ruthless in attaining Lady Holly’s help but in the end, he got it and that persistence made me lust after him all the more.

Can you imagine having the love of a man such as Bronson? There was an intenseness in Zachary that you couldn’t help but be in awe of. He was just so good. While rereading this book, the descriptions of Zachary had me singing, I Wanna Sex You Up by Color Me Badd in my head. I could see it all in my head, Zach would come home from a hard day at work and I’d open the door and just start singing, “Come inside, take off your coat, I’ll make you feel at home. Now let’s pour a glass of wine cause now we’re all alone. I’ve been waiting all night so just let me hold you close to me…cause I’ve been dying for you boy to make love to me….boy you make me feel real good….” LOL, yeah I’d totally sing that song to him.

My favorite scenes are the scenes in which Zach is interacting with little Rose. Here’s one of them that I absolutely adored:

“Good afternoon, Mr. Bronson,” [Holly] said, gesturing for him to take a seat next to her. “I hope you will not object if Rose plays in the corner during our discussion today. She has promised to be very quiet.”

“Naturally I wouldn’t object to such charming company.” Bronson smiled at the petite child, who sat on the carpeted floor with her toys. “Are you having tea, Miss Rose?”

“Yes, Mr. Bronson. Miss Crumpet asked me to pour. Would you like a cup, too?” Before Holly could restrain her, the little girl hastened to Bronson with a doll-sized cup and saucer no bigger than his thumbnail. “Here you are, sir.” A tiny concerned frown adorned her brow. “It’s only ‘air tea,’ but it’s quite delicious if you’re good at pretending.” Bronson accepted the cup as if it were a great favor. Carefully he sampled the invisible brew. “A bit more sugar, perhaps,” he said thoughtfully.

Holly watched while the two prepared the cup to Bronson’s satisfaction. She had not expected Bronson to interact so comfortably with a child. In fact, not even George’s brothers, Rose’s own uncles, had displayed such ease with her. Children were seldom part of a man’s world. Even the most doting father did little more than view his child once or twice a day and inquire after his or her progress.

Glancing at Holly briefly, Bronson caught her perplexed expression. “I was coerced into more than a few tea parties by Elizabeth when she was no bigger than Rose,” he said. “Although Lizzie had to make do with shingles for plates and an old tin cup instead of china. I always swore I’d get her a proper toy tea set someday. By the time I could afford one, she was too old to want it any longer.”

To see a grown pay so much attention to a young girl, especially in that day and age made me sigh all over the place. I had already softened toward Zach by the time I read the scene above but it was this scene that made me the big Zach fan that I am.

Zachary squatted down before her, staring at her eye to eye, and an affectionate grin tugged at his lips.

“What’s the matter, princess?” he asked gently, although he already knew.

Rose unburdened herself eagerly. “Mama says we have to go away. We’re going to live at my uncle’s house again, a-and I want to stay here.” Her little face crumpled with childish sorrow, and Zachary nearly staggered from the impact of an invisible blow to his chest. Panic…love…yet more anguish. Although saying good-bye to Holly hadn’t quite killed him, this would certainly finish him off. Somehow during the past months he had begun to love this enchanting child, with her sugar-sticky hands, her jangly button string, her long tangled curls, her brown eyes so like her mother’s. No more tea parties, no more sitting in the parlor before the hearth and spinning tales of bunies and cabbages, dragons and princesses, no more miniature hands that clung to his so trustingly.

“Tell Mama that we must stay here with you,” Rose commanded. “You can make her stay, I know you can!”

“Your mama knows what’s best for you,” Zachary murmured, smiling faintly though he was dying inside.

“You be a good girl and do as she says.”

“I am a good girlalways ,” Rose said, and began to sniffle again. “Oh, Mr. Bronson…what will happen to my toys?”

“I’ll send every last one to you at the Taylors’.”

“They won’t all fit.” She used a chubby hand to smear a teardrop across her cheek. “Their house is much, much littler than yours.”

“Rose…” He sighed and pressed her head against his shoulder, his huge hand engulfing the entire top of her skull. She stayed against him and snuggled close, patting his scratchy jaw. After a while, she wriggled away. “You’re squashing Miss Crumpet!”

“Sorry,” he said contritely, reaching out to straighten the doll’s little blue bonnet.

“Will I ever see you and Lizzie again?” Rose asked woefully.

Zachary couldn’t bring himself to lie to her. “Not very often, I’m afraid.”

“You’ll miss me awfully,” she said, heaving a sigh, and she began to fumble for something in the pocket of her pinafore.

Something went wrong with Zachary’s eyes, some odd blurring and stinging that he couldn’t seem to blink away. “Every day, princess.”Rose extracted a small object from the pocket and handed it to him. “This is for you,” she said. “It’s my perfume button. When you get sad, you can smell it, and you’ll feel better. It always works for me.”

“Princess,” Zachary said, making his voice soft to keep it from cracking, “I can’t take your favorite button.” He tried to give it back to her, but she pushed his hand away.

“All right.” Zachary closed his fist over the button and bowed his head over it, struggling with his unruly emotions. He had done this to himself, he thought. He had schemed and manipulated until he had gotten Lady Holland Taylor to live in his home. But he had never anticipated the consequences. If he had only known…

“Are you going to cry, Mr. Bronson?” the child asked in concern, coming to stand beside his knees, staring into his downturned face.

He managed to smile at her. “Just a little on the inside,” he said raspily. He felt her little hand on his cheek, and he held utterly still as she kissed him on the nose.

“Good-bye, Mr. Bronson,” she whispered, and she left with her button string trailing dolefully behind her.

If that last scene doesn’t endear you to Zachary Bronson then something is wrong…with you, not Zach because Zach is one of those underrated heroes that not very many people talk about. He seems to get lost in the shuffle that is Derek Craven and Sebastian St. Vincent. He’s one of the kindest men that I’ve ever read about and one of the strongest. His capacity to love and the hard work that he put forth to make sure his family was well taken care of just gets me every time. He’s one of those heroes that you can’t help but love. If you haven’t read his book then I highly recommend that you fix that because Zachary Bronson is a man that you definitely have to meet and I dare you to not fall in love with him. It’s not hard to figure out why he’s this month’s Hero of the Month, there are so many reasons why I love him so go on and find out the many reasons you’ll love him. 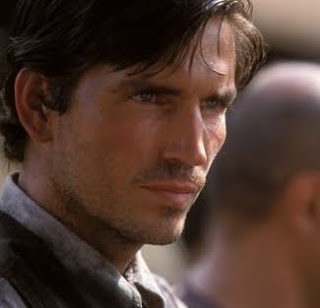 WHERE DREAMS BEGIN is available from Avon. You can buy it here.

4 responses to “Hero of the Month: Mr. Zachary Bronson”