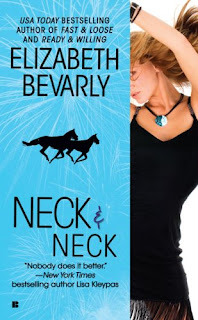 Tracy’s review of Neck and Neck by Elizabeth Bevarly.

There’s only one sure way for fledgling party planner Natalie Beckett to make her Kentucky Derby Eve soiree a success: get reclusive video game creator/billionaire Russell Mullholland to attend. But how can she even get out of the gate with Russell’s gorgeous bodyguard, Finn Guthrie, blocking the way? Never let it be said that Natalie doesn’t like a challenge, for soon she finds sparring with Finn far more exciting than landing Russell on her VIP guest list.

Natlie Beckett is a rich girl from Louisville, Kentucky. But much to her mother’s chagrin she went to college to get an education, not just to get a husband. Natalie’s tried to get many different businesses off of the ground, determined to make a go of it, but they’ve all failed. Her latest business, a party planning company, is the one that will make it. The very first client she gets is a friend of her mother’s and the client is throwing a Kentucky Derby eve party. Natalie has now had 8 months to plan it and unfortunately, no one is going to attend. Ok, a few people, but it’s just not a big draw. Natalie is desperate to get people there because it’s also a fundraiser for at risk youth and she wants her client to be able to give them a big fat check. While looking for a celebrity draw she finds out that reclusive Russell Mullholland is in town and she decides to go for it and get him there.
In her race to get Russell to the party she has to go through Russell’s bodyguard Finn Guthrie. From the moment they see each other they are attracted to each other but there’s no way that Finn is going to convince Russell to go to the party. Though Finn is attracted to Natalie he believes that she is engaged to another man and won’t make a move. He also doesn’t trust Natalie and her motives – but then Finn doesn’t trust anyone.
I have to say that I almost put this book down after the first 5 pages. Natalie had called herself a loser 5 times in 5 pages and all I could think was if a heroine of a book has so little self-esteem do I really want to read about it? But I kept going and it got better. Yes, Natalie is feeling horrible about the soon to be outcome of the party but I did have to admire her persistence. She did keep trying.
On top of Natalie and Finn’s realtionship we had a second romance going on between Russell and a cocktail waitress at a strip club going on. She wasn’t who she seemed but he didn’t know that at first. When he found out, he was more than shocked but he obviously had hidden depths and dealt with it well.
I have to say that though this book was cute and I actually laughed in a few parts, I wasn’t a huge fan of the writing style. I like a lot of dialogue in my books, I’m discovering, and this one had a lot of inner thoughts that I felt weren’t pertinent to the story. I found myself skimming 3 or 4 paragraphs at a time until I got back to the story.
I did like Finn and Natalie’s relationship up until the end. Finn had been adamant about how he didn’t want any woman in his life and then he gave in…just because he trusted her. With Russell and the waitresses relationship that was just too easy for me and I didn’t love that part of the story. It was all wrapped up in a little bow and I just didn’t personally care for it.
In the end: Cute story with some funny parts but I had some issues with it.
Rating: 3 out of 5

This book is available from Berkley Sensation. You can buy it here.

2 responses to “Guest Review: Neck and Neck by Elizabeth Bevarly”