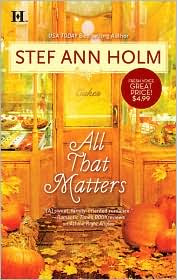 Rowena’s review of All That Matters by Stef Ann Holm.

When a megastore grocery chain threatens to shut down the new boutique bakery Chloe Lawson’s worked so hard to establish, she’s furious. Her life may not be picture-perfect, but her custom cakes and pastries are becoming the talk of Boise, and she’d like to keep it that way.

Chloe needs a champion, and handsome, widowed John Moretti turns out to be it. A high-powered lawyer whose two rebellious teenagers are the only people he doesn’t seem able to impress, John is shocked to find himself fighting for Chloe’s little cause, much less falling for her. But once he samples her home-baked charms, he’s hooked—and determined to make her a permanent part of his family.

I picked this book up from the Used Book Store near my house and I was super excited to read it because for those of you guys who know me, I have a thing for bakery themed stories or stories that have a baker or bakery in it and this one definitely has that.

Chloe Lawson opened her bakery doors 5 months ago and since then she’s picked up a few loyal customers and is doing a steady business with much promise for more, only the property people don’t want to renew her lease since a big mega grocery store has bought the property and is waiting for the tenants to move out so that they can build their store. Chloe is stunned that she’ll have to move or fight the big dogs for her prime location. She doesn’t want to move because she loves the spot that she’s in right now but there’s not much to do when the big corporate bad asses are gunning for your location.

Then there’s John Moretti. John is a widowed lawyer who has his own set of problems, the biggest being reconnecting with his teenage children. John’s wife died three years ago and she was super woman, she was the soccer Mom that was home and took care of the house and the kids and was just…there, whereas John was always at work, bringing home the bacon. John didn’t really have much interaction with his kids and figured that as long as they had everything needed and wanted, that was enough but as we all know, it wasn’t. His kids grew to resent him and now he’s dealing with having to develop a parent relationship that is far different from the one that he’s always had with them and because they’re teenagers and not small children, it’s a lot harder for him to do that because teenagers are very sulky and they know more. On top of that, his brother wants him to help a small business bakery who is being kicked out of her shop because of the big mega store opening up soon.

Watching these two battle their monsters and deal with their problems while battling the relationship that blooms between them was cute. This is my first full fledged book by Stef Ann Holm and I really didn’t know what to expect. Her covers are always so cute and eye catching but I’ve never really heard much about her stories so I was curious enough to pick this one up. I’m not exactly mad that I bought it but I wasn’t exactly wowed by this story either.

This story was cute and fluffy and very PG, instead of the PG-13 and R books that I usually read. This reminded me of one of those Lifetime movies that we see on TV. It was cute but not great. I enjoyed getting to know both Chloe and John but the book for me, moved at such a slow pace that I was reading and reading but nothing was really happening. Nothing that made me want to forget the laundry, forget dinner and read. It was very easy for me to put this book down and do other things and those are the books that I know I won’t remember in the long run.

The book did end up being one of those sweet, romantic reads but I was still left wanting a bit more for both John and Chloe.

This book is available from HQN. You can buy it here in print, here in e-format or here for your Kindle.

One response to “Review: All That Matters by Stef Ann Holm.”