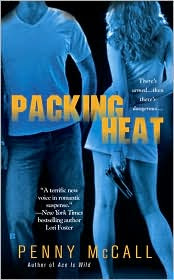 When a cool computer whiz-turned-convict is paired with a sexy FBI agent, love on the run turns into something much more than just fun.

This book follows FBI Agent Harmony Swift as she tries to manuever her way through the system to 1) break Cole Hackett out of prison and 2) free her good friend from kidnappers. She needs Cole’s computer skills to move some money that the FBI won’t move for the kidnappers so that she could free the only father figure she’s had since her parents died. She’s new to being a field agent and it’s clear from the jump why her superiors won’t put her in the field. She’s much too emotional and that’s so true. Harmony jumped into this little situation that she created for herself and at the beginning of the book, it felt like Harmony was in over her head and she was kind of just flailing about trying to make things work.

This book was definitely action packed, it was one action scene after another. They were running from the cops, running from the FBI and then they were jumping on trains and just..on the run. The action scenes definitely kept the story moving but it kind of took away from the characters. I mean, I saw the characters running for their lives and I was hoping that they’d make it out alive but I didn’t really know the characters. I knew their names and I knew that Cole was in prison because the FBI dicked him over and then I knew that Harmony’s parents died when she was a kid and that she was blonde but that’s about it. As the story progressed, we learned a little bit more about them but when I put this book down, I can’t say for certain that I would remember either the hero or the heroine a few months from now.

Cole Hackett has a big chip on his shoulder and he hates the FBI. They dicked him over and stole 8 years of his life and that big ass chip on his shoulder was understandable. He’s a computer nerd who beefed up in prison because he didn’t want to be anybody’s bitch so he learned to fight and he got muscles and turned himself into a sexy man, I thought he was a pretty decent hero. When we first meet Cole, he just got out of prison, he’s horny and he’s stuck with a gorgeous blonde and when she gets drunk and throws herself at him, he turns her away because she’s drunk? That made me laugh. Aside from the fact that even after I finished the book, I didn’t feel as if I knew Cole. The only thing I knew for certain was that he was a hot little computer nerd. Very sexy, but that’s it.

Same with Harmony. She was smart as a whip and witty to boot but after all was said and done, that’s really all I knew about her. Well that and she was lusting after Cole like it was nobody’s business. Harmony is an FBI Agent who is on a mission. One that’s not really sanctioned by the FBI but she needs to do what she needs to do to save the life of the only man that has given a damn about her since her parents died. The FBI won’t save him so she takes it upon herself to save him and to pull it off, she needs Cole’s help.

This was a pretty decent first Penny McCall read. I enjoyed the action scenes, I enjoyed watching Cole and Harmony together and watching them run for their lives but because I didn’t finish the book with a good sense of who the main characters were, it chipped away at my enjoyment of the book as a whole. I wanted more character development and I just didn’t feel like I got that but it was still an okay read and I would recommend this to anyone who wants to read those fast paced, action packed romances.

This book is available from Berkley Sensation. You can buy it here.