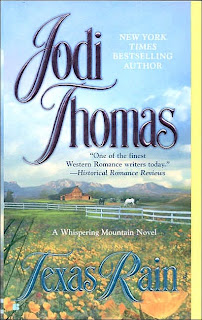 The first time Rainey Adams meets Texas Ranger Travis McMurray, she steals a kiss-and then his horse. Now Travis is determined to track down this intriguing woman and bring her back to the Whispering Mountain Ranch as his bride. But this renegade may be too much for even the toughest Ranger to handle.

2008 is a year of Rowena trying out new authors that she probably would have been too scared to try out. This author was an author that I’ve seen some really good reviews on and I was kinda excited to try them out. I love westerns. I will always read Wendy’s blog because she’s a lover of Western romances. She always has some really good suggestions on books to try out and she’s totally at fault (okay partially at fault) for why my TBR list keeps growing and growing and just won’t quit it.

This book is a western type book and I thought that I would fall head over heels in love with it because I love cowboys, boys that work on a ranch and boys that are good with horses. Travis MacMurray is a Ranger who’s back home after being gone for a long time and he’s stuck with the job of escorting his younger sister, Sage, to the dance. He doesn’t want to take her but because he’s been gone for a long time, he agrees to take her to make her happy. It’s at this dance that he meets a mysterious lady who makes him take notice of her and then just as he’s going to look for her, he realizes that she’s going to be some kind of trouble.

After she takes off with his horse and then joins a wagon train, Travis rushes after her to find out who the hell she is (because of course, he can’t stop thinking about her) and to get his damn horse back. The wagon train is attacked and Travis is hurt.

Rainey on the other hand needs to get the hell out of Dodge. She’s got her own troubles that she’s running from and she doesn’t need the added trouble of the hottie cowboy dude who’s horse she lifted and who is on her ass, especially when he gets hurt and she feels responsible for him. She doesn’t have time for this added complication so after she makes sure that he’s going to live, she takes off and decides that she wants to start writing him letters to keep in touch with him.

Travis gets better and he goes after her, by this time, they’re like halfway in love with each other and because this is a romance, the hero rushes to find his mysterious lady and they’re thrown into situation after situation and in the end, love conquers all and they live happily ever after.

That’s the story all wrapped up into a tight little ball of info. The book itself wasn’t the worst book that I’ve ever read in my life but I wasn’t wrapped up in it. It was very easy for me to put this book down to read something else. It was through sheer force that I finished this book and though I enjoyed it, I’m not wowed by Jodi Thomas yet but I’m not going to give up on her.

When the story started, Rainey got on my nerves. When she took off with Travis’ horse, she got on my nerves but as the story grew on and I got to know who she was, who she was running from and just get to know her as a person, my annoyance with her drizzled down and by the end of the book, I thought, alright you were made for Travis. I ended up liking her a whole lot more than I was expecting.

I enjoyed all of the other characters too, especially Travis’ family. I’m going to give the other books a try to see how things pan out for these guys, Tobin’s book is next so I’m sure that will be something worth checking out. I just hope that there’s more umph in the other books because I’m curious but not overly excited.

Should you give this one a go? Maybe, I wouldn’t say stay far, far away from it but I wouldn’t say RUN NOW AND GO GET IT…if you run by it then go ahead and check it out but don’t break your neck trying to get there.

This book is available from Berkley. You can buy it here.