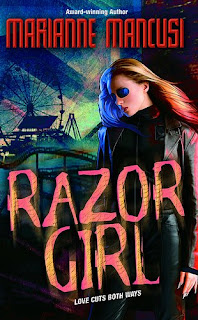 THE WORLD HAS ENDED, MOLLY.

WHAT ARE YOU GOING TO DO NOW?

Molly Anderson is not your average twenty-one-year-old. It’s been six years since she and her family escaped into a bunker, led by her conspiracy theorist father and his foreknowledge of a plot to bring about the apocalypse. But her father’s precautions didn’t stop there. Molly is now built to survive.

Yes, Ian Anderson’s favorite book gave him ideas on how to “improve” his daughter. Molly is faster, stronger, and her ocular implants and razor-tipped nails set her apart. Apart, when—venturing alone out of the bunker and into a plague ravaged, monster-ridden wilderness—what Molly needs most is togetherness. Chase Griffin, a friend from her past, is her best bet. But while he and others have miraculously survived, the kind boy has become a tormented man. Together, these remnants of humanity must struggle toward trusting each other and journey to the one place Molly’s father believed all civilization would be reborn: a magic kingdom, where everyone knows it’s a small world after all.

I LOVE zombie movies. I don’t know what it is, but there you have it. So I jumped on the chance to read Razor Girl. Also reading Holly’s review didn’t hurt. LOL (Thanks for that background info on Molly Millions.)
Razor Girl is a futuristic tale that deals with a DNA mutation that creates zombies out of the majority of the populace. Our razor girl is Molly Anderson. The book features Molly’s current existence interspersed with flashbacks from when she was 15 – when the zombies began appearing. I enjoyed how the backstory played out at the same time as the current one.
Molly’s current existence is about survival. After people began getting sick, Molly and her mother were locked up for 6 years in an old fallout shelter created by Molly’s dad. Finally free, Molly’s main goal is to find her father – and fast. Before her encapsulation, Molly’s dad tampered with her blood to give her an edge, he put nanobots in her system and now those nanos are dying. But the nanos aren’t the only thing Ian Anderson did to Molly. He also gave her 4-inch blades under her finger nails and occular implants. She’s a lean, mean, fighting machine.
But on the outside, Molly’s still unknowledgeable about basic survival. She knows nothing about the Others and she ends up banding together with an old high school friend, Chase. After some Others attack their group, Chase talks Molly into taking their motley crew with her down to Disneyland, where her father was going to set up a new civilization and find a cure with his other science buds.
That’s the basic premise for Razor Girl. But their journey to Disneyland from California is wrought with danger and not all of it from the Others. I really enjoyed the roadtrip aspect to RG.
The characters…the characters are young. Molly was 15 when she was locked away, so now she’s 21. I don’t know that Chase is much older than her, so yeah, these are young characters for such a heavy theme (the end of the world and all). It makes sense though, that some of the reactions our characters have can be immature at times. That kind of got annoying, but it’s true to the characters. And there’s one person in particular I wanted to die a horrible horrible death. But it doesn’t happen so I’m giving RG a B. Well I’m not only giving it a B for that reason – I also would have liked to have seen some more zombie action. I don’t think Molly showcased her kick ass-ness enough.
All in all, definitely check out Razor Girl. There is action, there is love and there are zombies. What more can you ask for?
This book is available from Shomi. You can buy it here or here.