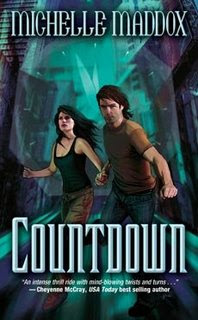 Reason for Reading: The Book Binge was having Shomi month and since the books looked good I wanted to read one.

THREE
Kira Jordan wakes up in a pitch-black room handcuffed to a metal wall. She has 60 seconds to escape. Thus begins a vicious game where to lose is to die.

TWO
The man she’s been partnered with–her only ally in this nightmare–is a convicted mass murderer. But if he’s so violent, why does he protect her? And stranger still, what is it behind those haunted sea-green eyes that makes her want to protect him?

ONE
No one to trust. Nowhere to run. And the only hope of survival is working together to beat The Countdown.

Ok, I’m going to attempt this review without spoilers…not an easy task, let me tell ya!

This book started off with a bang. As the summary said, Kira wakes up in a darkened room (which sucks since she’s deathly afraid of the dark) with Rogan and has no idea why she’s there, how she got there or who Rogan is. Kira and Rogan only talk for a few minutes before things start happening. Not really knowing what’s going on Kira helps Rogan because he is injured.

They have been chosen for the game The Countdown. Participants get their skulls implanted with nasty little devices and are forced to play the game and either beat the countdown or get eliminated from the game via the implant. Elimination = death. The implant will pretty much melt their brains and their head will explode. Not something either party wants to happen so they try really hard to win each level.

Rogan and Kira work together to get through the 6 levels of the game and do their best to not die. Many different aspects of their lives get broadcast to the “subscribers” of the game (those who are watching this show and are hungry for death) and inevitably they talk about things that have happened in their lives. Many, many secrets get revealed about Rogan, his family and his past. Although Rogan has been convicted of the rape of 3 women and the murder of 9 and has been in prison for the past 4 years Kira, who has empathetic psi abilities, doesn’t “feel” that he is a bad person.

With Kira and Rogan delving into each others pasts they come to know each other and find they like each other. I thought their romance was a little rushed, but it did work in the end.

I really liked Rogan from the first time he was introduced. Yes, he’d been in prison for 4 years, but he wasn’t hardened like you assumed he would be. He seemed to have a good sense of humor despite his circumstances and I liked his optimism.

Kira’s family had been murdered when she was just 15 and she had been on the streets since then. Her main goal in life was to A) stay alive and B) get to Offworld, another inhabitable planet that was supposed to be much nicer than earth. As with Rogan I would have assumed that Kira would be hardened from her time on the streets, but she wasn’t. Yes, she had learned how to be a pickpocket and steal what she needed but deep down I think she was a kind person and she was basically looking for someone to love her.

Overall I’d say it was a good read. The initial excitement did die down a little which was disappointing, but there was definitely never a dull moment in the book.

Was the author new to you and would you read something by this author again?

She is new to me. I would definitely read more of her work.

Are you keeping it or passing it on?

Did you enjoy the book? yes

Would you recommend this book to others? Yes

Anything else? Michelle Maddox also writes under the name Michelle Rowen.

This book is available from Dorchester. You can buy it here.

Check out more from Tracy at Tracy’s Place.