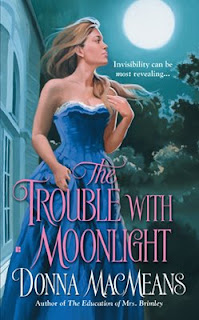 In the midst of a moonlit safecracking mission, British spy James Locke witnesses a ruby necklace spirited away as if by conjurer’s trick. Following the jewels leads him to Lusinda Havershaw, who’s inherited the talent of turning invisible in the moonlightat least, the parts of her that are unclothed. Locke trains Lusinda in espionage, even while he finds her close proximity bewitchingly distracting. And as their mission to track Russian spies grows treacherous, they’ll find that the heart behaves even more mysteriously than Lusinda in the moonlight.

Alright, this book is very different from anything I’ve ever read before. I say different because though I’ve seen and read my fair share of books with were-wolves, were-hunters, dragon slayers and the like but I’ve never read a story about a heroine who becomes invisible in the moonlight and has a job as a recoverer of stolen property to take care of her aunt and her two younger sisters. When I say, she’s invisible, I mean…really, she’s invisible. And so when she wears clothes at night, she looks like she might be related to the Headless Horseman.

It kinda blew me away at first and made me laugh but as I delved right into the story, I forgot all about that being funny and corny. This story picked up and never really slowed down for me. It starts off with Lusinda going on a job (you know invisibly) to retrieve some jewelry for a wife who’s husband gave away without her permission. It wasn’t his jewelry to give away and she wanted it back so Lusinda went in and got it back for her. It’s while she’s on this mission that she comes across the hero of this book, James Locke who can’t believe his eyes because jewels are flying out of the room without anyone actually holding them. Straight blew his mind and he had to find out who it was to recruit them to work for the government.

And recruit them he does but what’s funny about the way he recruits Lusinda is that he traps her and finds out that the only way she can truly be invisible to do this job is if she’s…naked.

I’m seriously not making this up but goodness I had me a good laugh at that one but aside from those corny little things, this story was really good. I had no problem keeping up with the storyline and the characters were refreshing and the pacing was pretty decent.

I’m really glad that I picked this book up to read because I read this pretty quickly and was happy that I did because it was a great storyline, despite the corny stuff.

James Locke was a fantastic hero, I really enjoyed his character. He’s got some other issues that he works through throughout the book but I really dug his character. He was strong, sexy and capable. He knew he had issues but he worked through them and on them and came out better for it and I just really liked him. I liked the way that he was with Lusinda, their relationship was a very big highlight of this book, I loved the scenes with them together. The way that he trained Lusinda zipped right through and I really enjoyed reading those bits.

Lusinda on the other hand, though I enjoyed her character she did kinda get on my nerves sometimes. Like there’s a scene in the beginning of the book where James traps Lusinda and she’s just walking around naked as the day she was born, minding her own business and BAM! He catches her and she’s all offended because hello, she’s naked and there’s this guy all on top of her then she becomes all OH NO GET OFF ME ITS NOT APPROPRIATE and then the next thing you know, she’s back to walking around naked as can be without a care in the world, she did that a bunch of times in the book and it kinda got on my nerves but aside from that little flaw in her character, I enjoyed her. I enjoyed her relationship with her sisters and her relationship with her Aunt and I really, really enjoyed her relationship with James.

All in all, this book was good. It was a delightfully entertaining story and I will definitely be checking out more from Ms. MacMeans.

4 responses to “Review: The Trouble with Moonlight by Donna MacMeans.”