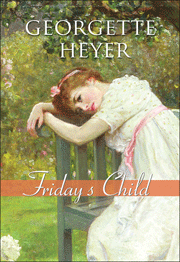 When the incomparable Miss Milbourne spurns the impetuous Lord Sheringham’s marriage proposal (she laughs at him—laughs!) he vows to marry the next female he encounters, who happens to be the young, penniless Miss Hero Wantage, who has adored him all her life. Whisking her off to London, Sherry discovers there is no end to the scrapes his young, green bride can get into, and she discovers the excitement and glamorous social scene of the ton. Not until a deep misunderstanding erupts and Sherry almost loses his bride, does he plumb the depths of his own heart, and surprises himself with the love he finds there.

Friday’s Child is my first Georgette Heyer novel, and all I can say is it won’t be my last!

Anthony, Viscount Sheringham, has just been rejected by the Incomparable Miss Milbourne, a childhood friend. When he stomps home to the ancestral estate, his mother and uncle demand a rehash of the event which just sets Sherry off – throw in the fact that he can’t stand his uncle and that he must wait 2 years to come into his Trust (unless he marries) and Sherry stomps out of his home claiming he’s going to marry the first woman he sees.

Right from the get-go, the reader gleans a lot of Sherry’s character. He’s selfish, a little uncouth and a rash sort of young man.

So the first woman Sherry comes across is no stranger to him – she is Miss Hero Wantage. And she’s crying. Her cousin has just informed her that she is to become a governess. It’s either that or marry the local curate. Hero has no choice because she is an orphan. Well, Sherry has always had a soft spot for Hero (she used to follow him around when they were children and get into every kind of scrape together – it’s all hero worship on her part, selfishness on his) so he decides that she is the perfect bride for him. They will have a marriage of convenience and will not interfere in each other’s affairs.

It’s not long before Sherry realizes that Hero is still quite the naive miss and needs a lot of direction from him. She’s forever getting into trouble, or on the verge of. And all Hero wants to do is make Sherry happy. So when he finally has had enough and decides to send her away to his mama (who thinks Hero is ruining Sherry’s life), Hero runs away.

First there’s Hero. She’s just out of the schoolroom and so eager to please Sherry. She doesn’t really have the best social graces but she does get along famously with Sherry’s friends: Gil, Ferdy and George, Lord Wrotham. So when she decides to run away, these three come to her aid. Well Gil is the one that spearheads the effort – because he knows that Sherry has never told Hero that he loves her even though he does. Gil figures Sherry is too thickheaded to realize it.

Hero also, through her innocence, brings Sherry around. He is still selfish, but he begins to realize that Hero gets into all her many scrapes because it’s something he would do. Whenever he brings her to task for something, she says, “But Sherry, you said…” So this was interesting to see how Sherry changes over the course of the novel, all for the better.

The cast of characters was also well written. Sherry’s friends, Miss Milbourne, and the villain – a bad man in disguise. It’s all good stuff.