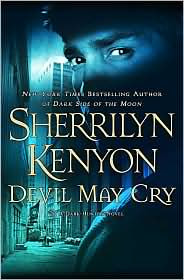 Sin, an ancient Sumerian god, was one of the most powerful among his pantheon–until the night Artemis robbed him of his godhood and left him one step from death.

For millennia, the ex-god turned Dark Hunter Sin has sought to regain his powers and take revenge on Artemis. But now he has bigger fish–or in this case, demons–to fry. The lethal gallu that were buried by his pantheon are stirring, and they are hungry for human flesh. Their goal: to destroy mankind. Sin is the only one who can stop them…if a certain woman doesn’t kill him first.

Enemies have always made strange bedfellows, but never more so than when the fate of the world hangs in the balance. Now a man who only knows betrayal must trust the one person most likly to hand him to the demons. Artemis may have stolen his godhood, but this one has stolen his heart. The only question is: Will she keep it…or feed it to those who want him dead?

While other readers turn to the Black Dagger Brotherhood to fix their crack addiction, I turn to the Dark Hunters. I was introduced to the Dark Hunters long before I knew about Rhage, Zsadist and the other Brothers and it was this series that I cut my paranormal teeth on. It was this series that I fell head over heels in love with and that even though I know I shouldn’t read them, I almost always do anyway.

My friend Theresa picked me up from my house Saturday and wanted me to go with her to the salon. She wanted me to go with her to pick out which red she was going to die the bottom of her hair and she also wanted to talk books. It was at the mention of books that I said, “Alright, I’ll be ready in 20” and twenty minutes later, we were sitting in the hair salon, dye samples on our laps, talking about Acheron. I hadn’t yet read Devil May Cry but I heard a lot of spoilers and so I was still able to throw our theories out at each other and it was good to talk with my mouth about the books that I love instead of talking with my fingers, through blogs.

A few years ago, Theresa would call me up and ask me a question about Dark Hunters, Dream Hunters and Katagaria and I would rattle off the answers right off the top of my head, that’s how much I loved this series.

As much as I loved this series, I still got tired of it…but no matter how tired of this series I get, I still read the books as they come out. I’m just not as quick to jump up and buy the books as I once was, which is why it took me so long to read this book. I would’ve continued to not read this book if not for Theresa, handing me the book once we got back to her house and demanding that I read it so that we can gush and wait for Ash’s book to come out because no matter how tired of this series I am, I AM going to get Ash’s book and pay the full price for the book in hard cover come August.

It’s just one of those things.

Now anyway, on with my review…this book was about a Dark Hunter who wasn’t really a Dark Hunter, but a Hunter of Dark things. Dark things that are like daimons but worse. They’re like the Sumarian daimons, they’re meaner, uglier and they eat, kill and turn humans, daimons, anyone into them and they were on a trekk to take over the world and there was only one god, or ex god that stood in their way of world dominance.

Sin was a good hero, I enjoyed getting to know him. He has the same M.O. as the other Dark Hunters, he was a tortured soul, one who was betrayed one too many times and was bitter because of it. He has to learn to love again and against his better judgement he falls for the daughter of his most bitterest of enemies…the bitch goddess who stole his godhood from him.

I swear, she’s in the middle of everyone’s problems. I don’t think that Artemis is Ash’s heroine because there’s just too much there. Too much history, too much hatred and just too much of everything. Their story is dunzo and I’m glad for it.

But goodness, who the hell is Ash’s heroine?

Anyway, so we find out who Kat is…and that didn’t surprise me because I remember having that talk with my girls and that theory was thrown in there and so when it came to be true, it didn’t surprise me but what surprised me was how much my heart softened toward Ash in this book. I’ve always loved Ash but he was never my favorite, I guess because there was always so much mystery surrounding him that I couldn’t be arsed to love him as much as the others because I didn’t know him as much as I knew the others…stupid reason but there you go.

After reading this book, I want more than anything to read Ash’s happy ending. My favorite part of this book was how Ash, for once, got to be there and help his friends out. Sin was Ash’s friend and I’m just glad that for once, Artemis let him go help save the day instead of keeping him trapped in Olympus.

I loved all of the Ash stuff in this book. I loved seeing him in his true form, I loved the little tidbits that we got to better understand the man we all know and love. I loved seeing the softer side to him while he was with Katra and I just fell more in love with him.

Katra and Sin’s story was good, it was complicated, it was messy but it was good. I thought that Katra being an 11,000 year old virgin to be a bit much but hey, whatever rocks your socks. I thought that Sin reminded me of Zarek throughout some of the book, especially when he was snarling at Katra about something or other but Zarek is my favorite Dark Hunter so that’s not necessarily a bad thing.

I enjoyed the world building in this story and the set up for other books, I know that I’m going to continue reading this series because it’s my crack and I still enjoy the books for what they are, entertainment.

This book was a pretty good read, lots of action, lots of stuff to remember and lots of people to wonder about and it’s not over…so there will be more drama to come and I know that I will be reading it, I can’t help myself.

Read this book, if for no other reason than to continue the series…it’s not a bad read and I find myself wanting to read Xypher’s book, even if I don’t care for The Dream Hunters. And August, hurry up and get here so that I can finally get my grubby paws on Ash’s book.

Hey Holly, do you still think that Artie’s going to end up with Nick?

And am I the only one that misses the older characters? Wouldn’t you guys like to see the other DH’s come back and help save the world with the new characters? I know I would…not all of them are Dark Hunters still who will drain each other’s powers…but goodness, it’d be good to see Kyrian, Julian, Talon, Wulf and all of them united like X Men to kick some Daimon and Gallu butt!

4 responses to “Review: Devil May Cry by Sherrilyn Kenyon”