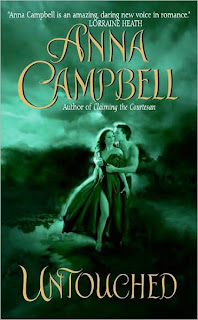 Beautiful Grace Paget has no reason not to believe these words. After all, she was kidnapped, spirited away to a remote country manor, and told she is to grant this man his every desire . . . or lose her life. But Grace is no common trollop. So she risks everything to save her virtue by planning a daring escape, even though she finds herself tempted by this handsome man. There is something in his eyes that makes her wonder if he is as dangerous as he would have her believe.

Sheene knew nothing of the plan to bring him this woman. Locked up as a prisoner, called “mad” by all of the world, he will do anything to reclaim his life, and Grace’s sensuous beauty has distracted him from his goals. And although he finds her irresistible, he is horrified to hold her against her will. Now, together, they must both revolt against the strange set of circumstances that have forced them together—for only then will Grace truly surrender to him . . . forever.

Ok, i have been reading just not having time to review. Then hubby’s great grandma, who turned 100 in January, passed away on Saturday. So we’ve been dealing with funeral arrangements and all that.

In between all that I finished this book. This is how I described the book to Rowena:

ok. Grace is abducted by these two creeps. She wakes up after being drugged to see the hero of the book, Matthew. Matthew has been locked away at the family estate for like 10 years i think. His uncle made everyone believe Matthew was mad and unfit to man the title. Of course that’s a lie. The uncle just wants control of the money. Because Matthew has been trying to escape, uncle thinks getting Matthew a whore will kind of settle him down.

Except grace isn’t a whore. She got lost looking for her cousin. Grace is a widow from a respectable family. Her first husband was a way older man.

So then Matthew and grace succumb to passion. What was different in this book was that their first time having sex, grace was like… meh. LOL! But Matthew makes it up to her.

They fall in love and Matthew has a plot for grace to escape. Cause the guys who kidnapped her are trying to get at her. in fact one guy almost succeeded in raping her. So she’s in danger if she stays.

Grace makes it out and 4 months later she returns with her father and god father to free Matthew. Which they do and Matthew proposes. Grace says no. even though she loves him, she thinks he loves her just because she’s the first woman he’s been with and they were held captive together. So Matthew says he’ll return in a year for her to prove he really does love her. A year later, he returns and Grace is all “does he love me?” ugh.

The end kind of bugged me. Well Grace did. I understand what she was feeling but a year? The good part about that is we didn’t have to read about them being apart. The chapter ends with them going their separate ways and then the next chapter picks up a year later. We do get to hear what Matthew has been up too. Which was nice.

Anyways, I enjoyed reading this book. I love the cover too. I’m not sure what grade to give it. Maybe a B. Cause once I started I couldn’t put it down. I thought Matthew was a yummy hero. A virgin hero to boot! I hardly ever see that in romance. He was kind of buttheadish when he didn’t believe Grace really wasn’t a whore but I slowly forgot about that.

Grace was kind of…… I don’t know. I liked her but again how she was at the end. I think someone mentioned self sacrificing… I can’t remember.

5 responses to “Untouched by Anna Campbell”