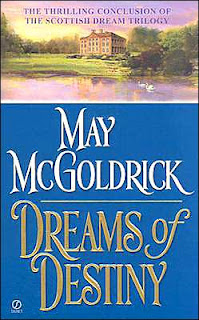 Wounded by scandal and the unsolved murder of his sister-in-law, David Pennington is outwardly insolent and arrogant. But nothing will stop him from escorting his childhood friend, Gwyneth Douglas, to Scotland-and saving the Scottish heiress from fortune hunters. But with their arrival in Scotland comes terrible danger. Now, if they ever hope to satisfy their fiery desire, they will need to thwart the evil that threatens to destroy both their lives…

This isn’t a bad book but I’ve been reading this for 3 weeks and I’m not even half way. So far now, I’m putting it down and maybe I’ll tackle it later.

I did skim though and damn. Ya see…. Gwyneth used to follow her cousin Emma around. She admired Emma. Everyone thought Emma was just wonderful. Really, Emma was all twisted inside. Part of the story deal with the problems Emma caused and who pushed her off a cliff. Emma was pregnant with another man’s baby and someone didn’t want her to reveal who the father was.

So I skimmed ahead to find out who the father of the baby was. Emma was disturbed. She was in love with this guy Walter and he loved her. But she married someone else and became Countess I think…. But she still loved Walter. Someone how, she finds out he’s her half brother. What does Emma do? She find hims and seduces him. Then she tells him they are related.

And Walter is the father of the baby.

I just realized, I cared more about finding out what happened with Emma than I did the main characters. hmmm.

Joint Review: Not Quite a Husband by She
5 Comments
Tagged: Did Not Finish, Historical, Isabel's Reviews, May McGoldrick, Reviews

5 responses to “Dreams of Destiny by May McGoldrick”