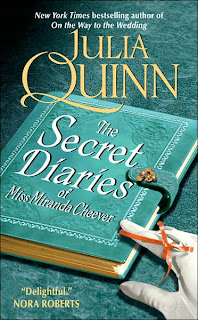 But the years that followed were as cruel to Turner as they were kind to Miranda. She is as intriguing as the viscount boldly predicted on that memorable day—while he is a lonely, bitter man, crushed by a devastating loss. But Miranda has never forgotten the truth she set down on paper all those years earlier—and she will not allow the love that is her destiny to slip lightly through her fingers . . .

The Plot: When Miranda was 10, she knew she was an awkward thing. However her best friend’s older brother, Turner, tells her she just needs to grow into herself. He also advises Miranda to keep a diary so one day she can look back and smile. It’s then she falls in love with him.

About 10 years pass. Miranda is still in love with Turner but he has changed. Being married to an evil slut puppy has changed him and made him more… hard I guess.

What I Liked: I like the friendship between Olivia and Miranda. Best friends who are more like sisters. I liked Miranda. I loved how she was determined to buy a book from a Men’s bookshop. The guy made me want to slap for not selling it to her. But I guess those were the times back then.

I also like when she was labor, Turner is outside the room with Olivia. He says, after hearing her scream, “I’m never touching her again.” Then they hear Miranda scream, “HE’S NEVER TOUCHING ME AGAIN!” That made me laugh out loud.

What I Disliked: Turner could be a butthead sometimes but that was more annoying than disliking. It was missing something. Something that made me fall in love with Julia Quinn’s books.

What I thought overall: This book was ok. It wasn’t great. It wasn’t horrible. I thought it was so much better than On the Way to the Wedding though. I don’t know, the story line was ok. It kept me interested enough to keep reading but it didn’t really make me care about the characters. I felt nothing really. I don’t know how to explain it. I can’t say it was emotionless cause the bookshop owner made me mad but hmmm. I know I’m not explaining myself well. I just felt like something was missing from the book but I can’t pin point it.

Would I recommend it: If you had nothing to else to read, then sure. But don’t race out to the store.