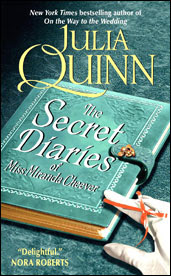 Releasing on June 26, is The Secret Diaries of Miss Miranda Cheever (mass market paperback). I love Julia Quinn. While I’m sad there are no more new Bridgerton books, I’m looking forward to her new material. This one looks very promising.

Today, I fell in love.

But the years that followed were as cruel to Turner as they were kind to Miranda. She is as intriguing as the viscount boldly predicted on that memorable day-while he is a lonely, bitter man, crushed by a devastating loss. But Miranda has never forgotten the truth she set down on paper all those years earlier-and she will not allow the love that is her destiny to slip lightly through her fingers . . .

Rowena and I are really excited for this one!!

Another one of my favorite authors, Jacquie D’ALessandro, is releasing a new book, Sleepless at Midnight (Mayhem in Mayfair). Since reading Not Quite A Gentleman, I’ve read and loved most of her books.

The ladies in London are abuzz over Mary Shelley’s Frankenstein, especially Miss Sarah Moorehouse. Her imagination is fired up, so when she spies Matthew Devenport, Marquess Langston, mysteriously sneaking home in the wee hours clutching a shovel, she simply must investigate. Impelled by curiosity, the adventurous lass steals into his bedchamber-only to be caught red-handed by the impossibly handsome and totally naked nobleman.

The Marquess Langston has more important things to worry about than a group of literature-loving ladies. But Matthew’s grand plan to rescue the family from ruin could be lost when he discovers Sarah hiding behind his bedroom curtain. What is this meddlesome woman up to? And why are his desires inflamed by a chit who is too inquisitive for her own good? Well, two can play at this game . . . and when Matthew captures the beguiling Sarah in all her naked glory, the night of mischief has only just begun.

I can’t wait to run out to the store to get this one. Happy Reading!