Posted May 3, 2007 by Book Binge Guest Blogger in Reviews | 5 Comments 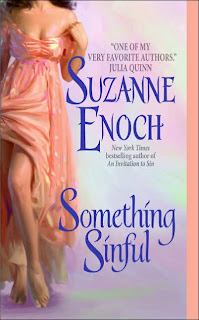 Isabel’s review of Something Sinful (Griffin Family #3) by Suzanne Enoch.

She was a vision, an exotic goddess who floated across the ballroom, conjuring images of warm nights and silk sheets, and Lord Charlemagne Griffin felt lightning shoot straight to his . . . well, he was definitely interested. So the lady isn’t exactly the sharpest knife on the rack, as Shay soon discovers, but the generous bosom just above her low neckline more than makes up for it. Before he knows it, Shay is bragging about an impending business deal to impress her . . .

Lady Sarala Carlisle may appear naÏve, but too late Shay realizes her unconventional beauty masks a razor-sharp intelligence and flawless instincts-and she’d just bested him! Well, two can play at this game, and one of Shay’s many skills is the fine art of seduction.

But in this contest, the only thing to lose is one’s heart.

This is the third book in the Griffin Series.

Charlemagne “Shay” Griffin is a business man. He can bargain with the best of them and he enjoys it. While at a ball he spots Lady Sarala. He’s smitten with her and dances with her. For some reason, he tells her about some silk bolts he’s going to purchase thinking she’s not really understanding what he’s talking about. Little does he know.

The next day, he’s with the seller and asks for the silk. Seller says sorry, someone beat you to the punch. Lady Sarala. Turns out she’s a pretty good business woman. Now Shay’s pride is hurt and he wants those bolts back. Sarala is asking for 6,000 pounds. Shay says no. Now he must try and figure out a way to get those bolts from her. One which includes wooing her.

Lady Sarala was born in India. Her parents moved there and never planned on returning to England. Now that they have returned, her mom is insisting Sarala be English and make a match. She shortens Sarala’s name to Sarah, tells her to wear certain colors and gowns. Sarala’s mom is basically one of those dreaded title hungry, match making mammas.

Sarala and Shay are forced into marriage because they were caught in a compromising position. She was about to sell the silk to him and was sealing the deal with a kiss. And wouldn’t you know someone walked in on them.

The rest of the story was ok. You have Shay learning the bolts of silk were stolen so now Chinese henchmen are after them. Turns out the silk was for the emperor of China. Shay has to get them back from Sarala so she isn’t hurt. When Shay tells her what’s going on, she doesn’t believe him. She thinks it’s another ploy for the silk so she ups her price. She slowly starts to believe him when he says fine. Then Sarala figures she should call off the wedding so Shay doesn’t put his life in danger for her. She of course doesn’t.

The biggest thing that bothered me was when Shay found out Sarala is not a virgin. Now why is it ok for men to have tons of lovers but a woman has one and he goes ape shit. Shay is annoyed and Sarala calls him on it. When Shay demands the name of the man Sarala responds, “Not unless you’re prepare to name every woman you slept with.” Which shuts him up.

So yeah, there you. I wasn’t really impressed with the book. I didn’t feel a connection between Sarala and Shay. Her mom got on my nerves. Ugh. But I will read the last book in the series though.

The books in this series:

Ps. Pardon my crappy review. I’m extremely tired and the coffee and Pepsi are just not doing it for me today.

5 responses to “Review: Something Sinful by Suzanne Enoch”